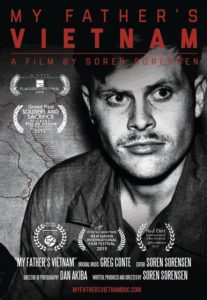 A personal film about a public subject, MY FATHER’S VIETNAM explores the human bonds forged and shattered by war. Set against the backdrop of never-before-seen photographs and 8mm footage of the Vietnam War, the film is the story of three soldiers, only one of whom made it home alive. MY FATHER’S VIETNAM  won the Soldiers and Sacrifice Grand Prize at the 2015 Rhode Island International Film Festival (RIIFF) and the Best Picture Documentary at the 2016 Flagler Film Festival. MY FATHER’S VIETNAM was directed by first-time filmmaker Soren Sorensen. Gravitas Ventures will release the film on VOD and across all other digital platforms on May 24, 2016, to coincide with Memorial Day Weekend. Director Sorensen joins us to talk about his father and the other soldiers that went to Vietnam and never truely came back.

For news and updates go to: My Father’s Vietnam

“I give this film my highest praise. I want people to see it to understand the deep thinking that went into the tough decision made by most veterans to serve in that lengthy and controversial military engagement—now remembered as the Vietnam War. Many veterans paid a high price. The tribute to the fallen is breathtaking.” Jan Scruggs Founder, Vietnam Veterans Memorial Fund

“My Father’s Vietnam“ is a powerful and gripping story—a worthy testament to complex lives and impossible choices made by young people coming of age while the world was in flames. These accidental heroes—soldiers, resisters, the women who waited and worried—emerge as fully human beings thrust into situations not of their making, struggling to make sense and create meaning out of chaos. This is a dazzling documentary and a necessary addition to the chronicle of the Viet Nam years.” Bill Ayers, Author, Fugitive Days