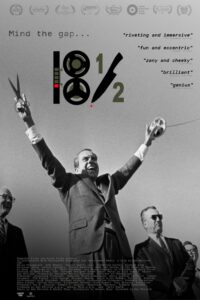 (Evil Dead) as President Richard Nixon. Directed by Dan Mirvish, “18½” features a screenplay by Daniel Moya, story by Mirvish and Moya, with classic cinematography by Elle Schneider. Director Dan Mirvish (Between Us, Bernard and Huey) and a Slamdance Film Festival Co-founder joins us to talk about the superb cast of actors he assembled for this historically inspired story that is one part comedy, one part 1970s paranoia, and wholly entertaining.

For news and updates go to: 18andahalfmovie.com

“18½” is a  101 Films International, Bugeater Films and  Kyyba Films production in association with  Syncopated Daydreams and Terry Keefe Media. Adventure Entertainment  will release “18½” theatrically in  cinemas in over 50 markets across North America on May 27th, beginning with Laemmle theaters in Los Angeles and expanding coast-to-coast on June 3rd.

About the filmmaker – Director, Producer, Editor, Songwriter Co-screenwriter and Award-winning filmmaker Dan Mirvish directed the critically-acclaimed features Bernard and Huey, Between Us, Open House and Omaha (the movie). He’s the author of The Cheerful Subversive’s Guide to Independent Filmmaking (Focal Press /Routledge), occasional journalist, frequent film school guest lecturer and cofounder of the Slamdance Film Festival. Dan is a former Washington, DC, speechwriter to US Sen. Tom Harkin, graduate of USC film school, and a member of the DGA. “18½” features a screenplay by Daniel Moya, story by Dan Mirvish & Daniel Moya, with classic cinematography by Elle Schneider.

“Mixing dark comedy and mild suspense, Dan Mirvish’s18 1/2is not the movie many would expect it to be. But the unpredictability of it all makes this madcap political fiction thoroughly diverting.” – Andrew Stover, Film Threat

“If you are in the mood for a fast-paced, highly intelligent effort with an intricate plot and surprising twists and turns, then ’18 1/2′ ticks all the boxes” – Susan Leighton, ScreenAnarchy

“… what follows in a tightly-structured 88 minutes that’s pumped full of 1970’s paranoia and dry wit.” – Douglas Davidson, Elements of Madness

“I always enjoy a good historical fiction. It’s fun to go back in time and wonder what might have happened or what people might have been like? Such is the case with the new indie 18 12” – Rachel Wagner, rachelsreviews.net