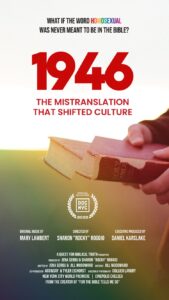 SHIFTED A CULTURE seeks to uncover the origins of the rabid homophobia of the conservative church, a gay seminary scholar and a straight activist make a shocking discovery: 1946 follows the story of tireless researchers who trace the origins of the

anti-gay movement among Christians to a grave mistranslation of the Bible in 1946. It chronicles the discovery of never-before-seen archives at Yale University which unveil astonishing new revelations, and casts significant doubt on any biblical basis for gay prejudice. Featuring Kathy Baldock, a straight ally, Christian LGBTQIA+ activist, Ed Oxford, an LGBTQIA+ Christian

researcher and a Masters of Divinity graduate of Talbot School of Theology, and prominent scholars as well as opposing pastors, including the personal stories of the film’s creators, 1946 is at once challenging, enlightening, and inspiring. Director Rocky Roggio uses her own complicated history as the queer daughter of a minister as a point of departure to bring us this fascinating personal investigation.

Director’s Statement – These beliefs, held by many dear to my heart, have cast a dark, dangerous shadow over my life. After years of searching for my voice, and calling, as a storyteller, my path has led me here. It is my goal to change the Christian narrative and liberate the many LGBTQIA+ people living in the dark; oppressed by bad theology. I want us all to live and be acknowledged as equals, under God’s love. There are truths that must be shared. We are here to share those truths.” – Sharon “Rocky” Roggio