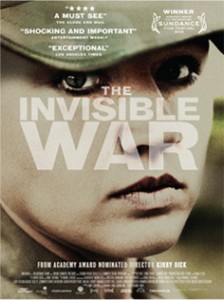 From Oscar®- and Emmy®-nominated filmmaker Kirby Dick (This Film Is Not Yet Rated; Twist of Faith) comes The Invisible War, a groundbreaking investigative documentary about one of America’s most shameful and best kept secrets: the epidemic of rape within the U.S. military. The film paints a startling picture of the extent of the problem-today, a female soldier in combat zones is more likely to be raped by a fellow soldier than killed by enemy fire. The Department of Defense estimates there were a staggering 19,000 violent sex crimes in the military in 2010. The Invisible War exposes the epidemic, breaking open one of the most under-reported stories of our generation, to the nation and the world. Kirby Dick discusses the impact this groundbreaking documentary is having on the Pentagon, rank and file military and the victims of sexual abuse.