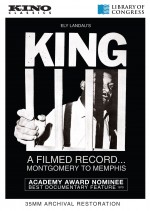 King: A Filmed Record…from Montgomery to Memphis is the landmark documentary that chronicles the life and work of Dr. Martin Luther King, Jr., from the beginnings of the Civil Rights movement in Montgomery, Alabama, and culminating with his assassination in Memphis in 1968. Originally screened in theaters for only a single night in 1970, King: A Filmed Record combines dramatic readings by Harry Belafonte, James Earl Jones and Paul Newman, among others, with newsreel and archival footage to create a powerful and comprehensive record of Dr. King’s legacy and the American Civil Rights movement. The original Associate Producer Richard Kaplan stops by to talk about this pivotal chapter in the life of Dr. King and the story behind this remarkable documentary.

“King: A Filmed Record . . . Montgomery to Memphis. Why this Oscar-nominated documentary so seldom sees the light of day is baffling: forty-one years later, it still brings cheers and tears and shows what we might be.” – Donald Levit, ReelTalk 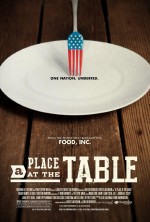 Fifty million people in the U.S.—one in four children—don’t know where their next meal is coming from. Directors Kristi Jacobson and Lori Silverbush examine the issue of hunger in America through the lens of three people struggling with food insecurity. Ultimately, A Place at the Table shows us how hunger poses serious economic, social and cultural implications for our nation, and that it could be solved once and for all, if the American public decides — as they have in the past — that making healthy food available and affordable is in the best interest of us all. The co-directors, Lori Silverbush and Kristi Jacobson joins us for a conversation on the causes and solutions to this frustrating crisis.

“The film explains with devastating simplicity why so many go hungry in a country with more than enough food to go round.” — London Evening Standard

“The Sundance Film Festival is chock full of documentaries this year about the troubles besetting America… but A PLACE AT THE TABLE may rank AMONG THE MOST MOVING in that it tackles a seemingly straightforward, solvable problem: hunger in the United States.” — LA Times

“How can you be both hungry and obese? It’s a paradox that more and more people in the United States are beginning to understand, and a question that’s convincingly answered in Finding North, A PROVOCATIVE DOCUMENTARY about hunger within America’s own borders.” — Press+1 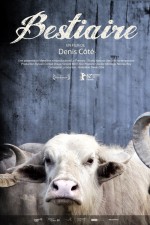 Fascinating and beguiling, Bestiaire is Denis Côté’s mesmerizing meditation on the relationship between man and beast. This strikingly beautiful film about looking —starts with a group of art students attempting to sketch an animal — that blurs the line between observer and observed. There may be no traditional narrative, yet there is breathtaking dramatic tension in every exquisitely framed shot: the sight of a lion attacking the doors of its cage or the scurrying striped legs of zebras in a holding pen. Contemplative and enthralling, Bestiaire is cinema at its purest. Bestiaire producer, Sylvain Corbeil joins us for a lively discussion on context and perception regarding animals, humans and otherwise.

“With wildlife documentaries expanding their bag of technological tricks and YouTube an ever-growing menagerie of pet videos, animal imagery has never been more prevalent. In some ways “Bestiaire,” nearly wordless but infinitely suggestive, is a comment on and a reaction to that saturation, a meditation on what we think we are looking at when we look at animals.” – Dennis Lim, New York Times

“Animals…so like us? Canadian filmmaker Denis Côté begs to differ in this extraordinary experimental documentary, about an inherent human need to dominate other species.” – David Fears. Time Out New York 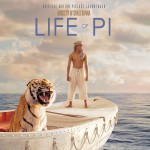 Mychael Danna recently landed his first two Academy Award nominations for Best Original Score and Best Original Song, Pi’s Lullaby. Danna is considered to be a frontrunner for this year’s Oscar after winning the Golden Globe Award for Best Score.

Danna has been scoring films since his 1987 feature debut for Atom Egoyan’s Family Viewing, a score which earned Danna the first of his thirteen Genie Award nominations, an award he has won five times. Danna is recognized as one of the pioneers of combining non-Western sound sources with orchestral and electronic minimalism in the world of film music. This reputation has led him to work with such directors as Terry Gilliam. Scott Hicks, Ang Lee, Deepa Mehta, Gillies MacKinnon, James Mangold, Mira Nair, Billy Ray, Joel Schumacher, and Denzel Washington. Mychael joins us for a conversation on the rewards that come with working on a eleven time nominated film and his work with many of the world best filmmakers. 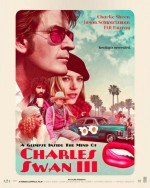 Set in a stylized Los Angeles, ‘A GLIMPSE INSIDE THE MIND OF CHARLES SWAN III’ is a playful comedy of lost love, friendship, revenge fantasies, and Brandy Alexanders. Charles (Charlie Sheen) is a successful graphic designer whose fame, money and charm have provided him with a seemingly perfect life. When his true love, a perplexing beauty named Ivana, suddenly breaks off their relationship, Charles’ life falls apart and he swirls into a downward spiral of doubt, confusion and reflection. With the support of his loyal intimates— Kirby (Jason Schwartzman), Saul (Bill Murray), and his sister, Izzy (Patricia Arquette) — he begins the hard road of self-evaluation to come to terms with a life without Ivana. The film begs the question: Is it possible to love and hate someone at the same time? Writer / Director Roman Coppola, brother of Sophia and son of Francis, joins us for a conversation about his wild, cinematic ride through Hollywood. www.CharlesSwaniii.com

Set in a war-torn fishing village in Somalia, an all Somali, refugee cast brings to life this coming of age fable of a Somali boy who is faced with falling into the pirate life, or rising above to choose the path of an honest fishing man. Director Bryan Buckley, a veteran commercial director and co-owner of Hungry Man Productions, has been directing since the mid-90s. Over the last decade he has directed more than 40 commercials for the Super Bowl and was dubbed “King of the Super Bowl” by the New York Times. Many pieces of Buckley’s work have been inducted into the Museum Of Modern Art’s permanent collection and he is an esteemed recipient of the DGA award, Emmy’s and many Cannes Lions. Bryan talks about his Oscar nominated Live-Action Short film and his journey from commercials to narrative filmmaking.