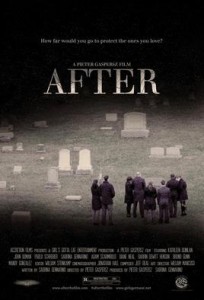 Set in the winter of 2002 in chilly upstate New York, AFTER tells the story of a middle class family struggling with the financial consequences of a failing family business and a series of intergenerational conflicts and rivalries. But, what truly threatens to upset their delicate balance– and shatter the emotionally fragile family matriarch, (played by Academy Award-nominee, Kathleen Quinlan)– is an intricately buried secret that, if revealed, could alter their lives irrevocably. AFTER is a provocative psychological drama about love, loss, and a family’s earnest and extraordinary efforts to deal with the emotional aftermath of tragedy. The film marks the exciting feature directorial debut of Pieter Gaspersz, who also produced with Sabrina Gennarino, who wrote the original screenplay. They both joins us for an engaging conversation on the power of denial, deception, and self-delusion, and the lengths we go to protect those we love.

For news and updates on After go to: Afterthefilm.com 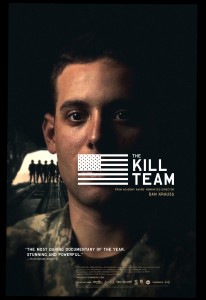 In early 2010, a group of U.S. soldiers in southern Afghanistan – bored, frightened, angry, and primed to explode – intentionally killed civilians, planting weapons on their victims to stage the incidents as “good shoots.” One of the group, the platoon sergeant, collected fingers as trophies. They called themselves “The Kill Team.” From Oscar®-nominated director Dan Krauss comes THE KILL TEAM, a story about a young soldier in Afghanistan who attempted to alert the military to horrific atrocities being committed by U.S. soldiers, and who then himself became a target of one of the largest war crimes investigations in U.S. history. With extraordinary access to the soldiers who were convicted and the evidence used against them, this film takes us inside a story that was largely impenetrable to the media. Speaking with an astonishing degree of candor and articulateness, these soldiers describe a series of increasingly weighty psychological quagmires, each emblemizing the hazy morality of war, where the choices are often clear, but the best decisions seldom are. Director Krauss joins us for what promises to be a spirited conversation on this multi-faceted tale of life during wartime.

For news and updates on The Kill Team go to: killteammovie.com

“Has the kind of urgent intimacy that characterizes the best
such non-fiction films…astonishing” – Ian Bailey,The Globe and Mail

“The most daring documentary of the year so far…a stunning, powerful film that boldly complicates the conversation around America’s wars” – Daniel Walber, Film School Rejects

“Among the most vital documents of the war in Afghanistan” – David Ehrlich,Film.com

What if our last act could be a gift to the planet? Musician, psychiatrist, and folk dancer Clark Wang prepares for his own green burial in this immersive documentary. While battling lymphoma, Clark has discovered a burgeoning movement that uses burial to conserve and restore natural areas, forgoing contemporary funeral practices that operate at the ecosystem’s expense. Boldly facing his mortality, Clark and his partner Jane have become passionate about green burial, compelled by both the environmental benefits and the idea that one can remain within the cycle of life, rather than being cut off from it. The spirited pair have inspired a compassionate local cemeterian, and together they aim to use green burial to save a North Carolina woods from being clear-cut.

The film follows Clark’s dream of leaving a loving, permanent legacy, and environmentalism takes on a deeply human intimacy. Documenting one community’s role in the genesis of a revolutionary movement, A Will for the Woods draws the viewer into a life-affirming portrait of people embracing their connection to each other and to timeless natural cycles. Co-directors Amy Browne, Brian Wilson and Tony Hale joins us for a conversation on a this moving portrait of a man facing his impending death and growing movement to go green as our last act.

For news and updates on A Will for the Woods go to: awillforthewoods.com

TED blog named us one of “9 documentaries that you need to see this year” calling it a “must-see documentary” which “has the potential to affect not just individual viewers but the American way of death.”

“This movie will open your eyes to a new way of thinking.” John Angelico, San Francisco Gate