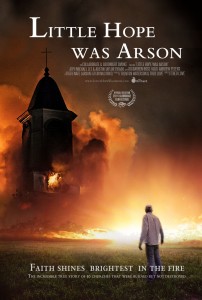 January 2010: In the buckle of the Bible Belt, 10 churches burn to the ground in just over a month igniting the largest criminal investigation in East Texas history. No stone is left unturned and even Satan himself is considered a suspect in this gripping investigation of a community terrorized from the inside-out. Families are torn apart and communities of faith struggle with forgiveness and justice in this incredible true story. Director Theo Love stops by for a conversation on the culture of East Texas and the unbending drive of the people in the area to find the perpetrators, and the unlikely culprits.

For news and updates on Little Hope Was Arson go to: littlehopewasarson.com

“It’s Americana unvarnished and, because of that, as absorbing as it is respectful.” – Neil Genzlinger, New York Times

“The film’s exploration of the tenuous bonds within a community will surely prompt serious soul-searching.” – Martin Tsai, Los Angeles Time

“A fascinating story told with deep insight, Little Hope Was Arson finds that both fire and forgiveness burn in different ways.” – Kevin Jagernauth, The Playlist

“How the investigation unfolds, and the dramatics escalate, is as engaging as any compelling narrative can be…” – Mark Bell, Film Threat 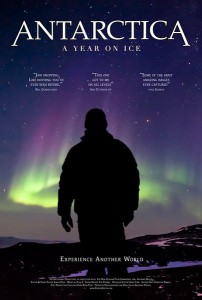 Although only a few scientists and researchers brave the extreme conditions of Antarctica year-round, the continent hosts a close-knit international population of base workers, chefs, technicians and tradespeople who keep everything running. ANTARCTICA: A YEAR ON ICE is their story. Completely isolated from the rest of the world, enduring months of unending darkness, Antarctic residents experience firsthand the beauty and brutality of the most severe environment on Earth. From everyday moments of work and laughter to holiday celebrations and even the filmmaker’s own wedding, ANTARCTICA: A YEAR ON ICE shows a determined community thriving in a world most people will never know. Boasting footage gathered over 15 years, including nine winters spent in 24-hour darkness, this unique documentary speaks to the planet’s natural wonders, humanity’s thirst for adventure and the emotional journey that accompanies a year spent on the ice. Director/photographer Anthony Powell joins us from the frozen continent to talk about the spirit of Antarctic culture and the breathtaking splendor contained within the last pristine wilderness left on the planet.

For news and updates on Antarctica: A Year on Ice go to: musicboxfilms.com/antarctica

“Breathtaking! A deeply moving experience. I urge you to see this film.” – Michael Sigman, Huffington Post

“Words are entirely inadequate to convey the experience of watching this film. An extraordinary achievement that reinvigorates our sense of wonder about the natural world.” – Peter Calder, The New Zealand Herald

“Spectacular!  A visual feast that gives you the most tangible impression of Antarctica possible.” – Bas Macdonald, Critic Culture 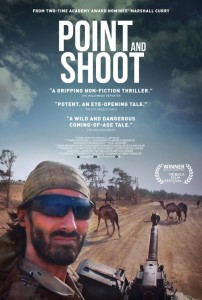 Winner of the Best Documentary Award at the Tribeca Film Festival, POINT AND SHOOT follows Matt VanDyke, a timid 26-year-old with Obsessive Compulsive Disorder, who left home in Baltimore in 2006 and set off on a self-described “crash course in manhood.” He bought a motorcycle and a video camera and began a multi-year, 35,000-mile motorcycle trip through Northern Africa and the Middle East. While traveling, he struck up an unlikely friendship with a Libyan hippie, and when revolution broke out in Libya, Matt joined his friend in the fight against dictator Muammar Gaddafi.  With a gun in one hand and a camera in the other, Matt fought in — and filmed — the war until he was captured by Gaddafi forces and held in solitary confinement for six months. Two-time Academy Award nominated documentary filmmaker Marshall Curry joins us for a conversation on this harrowing and sometimes humorous story of a young man’s search for political revolution and personal transformation.

For news and updates on Point and Shoot go to: pointandshootfilm.com

Grade: A “The tale told in Point and Shoot is a virtual swashbuckler… a subtle, but nonetheless eloquent critique not just of one man’s compulsions, but a culture’s.”
-John Anderson, Indiewire Read Article

“Spellbinding… addresses such compelling issues as the impact of the camera on human behavior and identity.”
-Lloyd Grove, The Daily Beast Read Article

“Transformative in every sense of the word, a strangely inspiring tale that will leave you wanting to discuss it for hours… It is without a doubt my favorite [documentary] this year.”
-David Costill, Cut Print Film Read Article 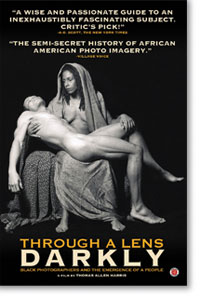 The first documentary to explore the role of photography in shaping the identity, aspirations and social emergence of African Americans from slavery to the present, Through a Lens Darkly probes the recesses of American history by discovering images that have been suppressed, forgotten and lost. Bringing to light the hidden and unknown photos shot by both professional and vernacular African American photographers, the film opens a window into lives, experiences and perspectives of black families that is absent from the traditional historical canon. These images show a much more complex and nuanced view of American culture and society and its founding ideals. Inspired by Deborah Willis’s book Reflections in Black and featuring the works of Carrie Mae Weems, Lorna Simpson, Anthony Barboza, Hank Willis Thomas, Coco Fusco, Clarissa Sligh and many others, Through a Lens Darkly introduces the viewer to a diverse yet focused community of storytellers who transform singular experiences into a communal journey of discovery – and a call to action. Director Thomas Allen Harris joins us to talk about the extraordinary power of photography to shape, distort and illuminate African-American lives from slavery to the present.

For news and updates on Through a Lens Darkly go to: firstrunfeatures.com/throughalensdarkly

Opening Friday, November 14th at the Laemmle Playhouse 7 in Pasadena

“At-once a deep, rich dive into the history of African American photography and —  transcending the subject at hand — a master class in visual literacy.” - Mia Tramz, Time Magazine

A family memoir, a tribute to unsung artists and a lyrical, at times heartbroken, meditation on imagery and identity. The film is always absorbing to watch, but only once it’s over do you begin to grasp the extent of its ambitions, and just how much it has done within a packed, compact hour and a half. Overall, he is a wise and passionate guide to an inexhaustibly fascinating subject.” - A. O. Scott, The New York Times

“A timely reminder of how images of African-Americans have been stereotyped and demonized by popular media… cannily juggles an overview of African-American history in general with the specifics of its photographic representation and talents…Harris sometimes echoes the work of his late mentor Marlon Riggs (‘Tongues Untied’) in poetic editorial rhythms.” – Dennis Harvey, Variety

“One of the most important and necessary documentaries of the year.” – Indiewire 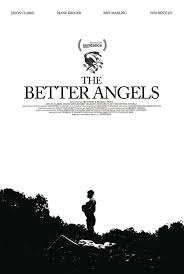 From writer/director A.J. Edwards, a protégé of Terrence Malick (who produced the film), comes the story of young Abraham Lincoln’s difficult childhood. The film is set in the Indiana woods, 1817, when Abe (Braydon Denney, in a striking performance) was eight. The entire nation, only 40 years old and a few years removed from a second war of independence, is raw. Men, women and children alike must battle nature and disease to survive in remote log cabins. The Better Angels explores Abe’s family, the hardships that shaped him, the tragedy that marked him forever, and the two women who guided him to immortality. Edwards creates breathtaking visual and narrative poetry to express the Lincolns’ world. The stark wilderness they inhabit comes alive in stunning black-and-white cinematography, portraying the physical and emotional struggle of the characters. With an elegant touch and precise attention to historical accuracy, Director Edwards shows the austerity of the era and reveals what shaped one of history’s most distinctive leaders.

For news and updates on The Better Angels go to:betterangelsfilm.com

“Whereas other directors have presented the man in mythic terms, “The Better Angels” renders young Abe relatable, provided auds are willing to put themselves on the film’s wavelength.” – Peter Debruge, Variety

“Shot in gorgeous, breathtaking black and white and edited in a documentary-like style, The Better Angels has a timeless sensibility to it.” – Austin Trunick, Under the Radar

“’The Better Angels,’ as pictorially beautiful and emotionally evocative as it is, is so bereft of conventional narrative momentum that you have to consider it a miracle it got made.” Glenn Kenny, Roger Ebert.com