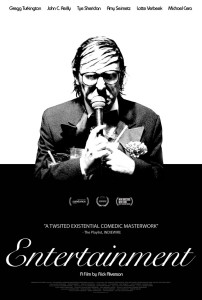 ENTERTAINMENT, directed by Rick Alverson and written by Rick Alverson, Gregg Turkington, and Tim Heidecker is the story of a broken, aging comedian tours the California desert, lost in a cycle of third-rate venues, novelty tourist attractions, and vain attempts to reach his estranged daughter. By day, he slogs through the barren landscape, inadvertently alienating every acquaintance. At night, he seeks solace in the animation of his onstage persona. Fueled by the promise of a lucrative Hollywood engagement, he trudges through a series of increasingly surreal and volatile encounters. In Alverson’s hallucinatory fugue, Gregg Turkington stars as The Comedian, caught in a struggle between being the center of attention and the object of alienation, occasionally challenged by an unexpected cast of characters played by Tye Sheridan, John C. Reilly, Michael Cera, and Amy Seimetz. Greg Turkington gives a brave, uncompromising performance as The Comedian in this daring and rewarding ride through a personal and cultural hellscape.

For news and updates go to: entertainment

Entertainment opens on November 19th at the Cinefamily in Los Angeles – cinefamily.org

“Like Hamburger’s meta-hacky comedy routine, the film confronts and challenges in order to produce something increasingly rare in American cinema: an active, engaged experience.” – John Semley, Globe and Mail

“I left this barbed portrait of a cracking-up comic with more than a little respect for its fearless director, Rick Alverson, and his trusting star, Gregg Turkington. You can’t deny that they’re a match made in heaven.” – Jeannette Catsoulis, New York Times

“It’s a portrait of the comedy tour as odyssey of madness, a plummet into the abyss.” – A. A. Dowd, AV Club 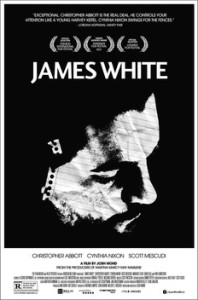 James White (Christopher Abbott) is a troubled twenty-something trying to stay afloat in a frenzied New York City. He retreats further into a self-destructive, hedonistic lifestyle, but as his mother (Cynthia Nixon) battles a serious illness James is forced to take control of his life. As the pressure on him mounts, James must find new reserves of strength or risk imploding completely.  The directorial debut of MARTHA MARCY MAY MARLENE producer Josh Mond,  JAMES WHITE, which had its world premiere at Sundance Film Festival 2014 where it was the winner of the “Best of Next” Audience Award, is a confident and closely observed debut that explores loss and the deep relationship between a mother and son.  Abbott’s strong central performance is aided by a stellar supporting cast featuring Cynthia Nixon (“Sex and the City”), Scott “Kid Cudi” Mescudi (“Comedy Bang! Bang!”), and Ron Livingston (DRINKING BUDDIES). Shot on location in New York City with an intimate visual style, JAMES WHITE follows its lead into deep, affecting places while still maintaining its fragile humanity. Director and writer Josh Mond joins us for a conversation on his deeply moving debut film.

For news and updates go to: jameswhitemovie

Now playing at The Landmark in New York

Opens at the ArcLight Hollywood in Los Angeles on Friday, November 20th

“Like no movie in recent memory, the feature debut of writer-director Josh Mond is a small marvel of evenhanded empathy.” – Tim Grierson, Paste Magazine

“Writer-director Josh Mond’s feature debut is a devastating portrait of the stress of being a caregiver, particularly one so young, that’s remarkably free of sentimentality or a typical tearjerker’s cues.” Tricia Olszewski, The Wrap 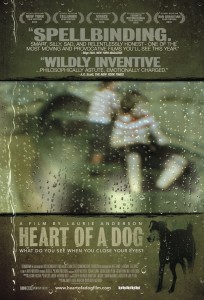 In HEART OF A DOG, musician and performance artist Laurie Anderson’s playful, lucid and heartbreaking nonfiction feature on the life and death of her dog, Lolabelle, told in a style only this unique artist could create. Taking as a jumping off point the recent passing of her beloved terrier Lolabelle, Anderson touches on what her love for her dog means to her by processing her childhood, music, and her life as an artist. Through all of it, she draws upon her childhood experiences and political beliefs as she lovingly tries to help Lolabelle’s spirit face the tribulations it will experience immediately after death (as described in the Tibetan Book of the Dead). Aided by a beautiful use of her own compositions, animation and 8 millimeter film from her family archive, Anderson creates a gorgeous, heartbreaking tapestry on love and loss – reminding us that every love story is a ghost story. Director Laurie Anderson joins us to talk about spirit and intention of Heart of a Dog, her thoughtful, funny and beautiful film.

For news and updates go to: heartofadogfilm.com

Director Laurie Anderson will be doing a Q&A for the 7:30 PM screening on Heart of a Dog on Friday, November 6

Laurie Anderson’s soundtrack for HEART OF A DOG is available at: nonesuch.com/albums/heart-of-a-dog

“A dog is at the heart of this film, but there’s room for all manner of extraordinary insights about finding love and giving love, being canine and being human.” – Joe Morgenstern, Wall Street Journal

“Exceptionally potent. I could write a whole essay about the way Anderson uses her light, scintillating voice in this movie. Her incredible control of the artistic arsenal this medium provides her with-images, music, sound, language-enable her to construct a work that’s both highly intellectually engaging and provocative and also emotionally wrecking.”  – Glenn Kenny, RogerEbert.com

Leith, North Dakota, is a ghost town with 24 residents. Its inhabitants are mostly farmers or ranchers, working land passed down from generation to generation. In 2012, an outsider named Craig Cobb moved in and started buying up property. He accumulated twelve plots of land, some empty, some with houses in various states of disrepair. People assumed he’d moved in to be close to the Bakken oil fields some 70 miles north. It turns out he is also a notorious white supremacist who was plotting a takeover of the city government in Leith. Shortly after his plans were unveiled by the Southern Poverty Law Center, a family of fellow white supremacists moved in to join his efforts. As Cobb’s behavior became more threatening, tensions soared, and the residents desperately looked for ways to expel their unwanted neighbor. With incredible access to both long time residents of Leith and white supremacists, the film examines a small community in the plains struggling for sovereignty against an extremist vision. That it takes place in the shadow of the biggest oil boom in North Dakota’s history makes Welcome to Leith a complex document exploring unforeseen causes and effects. Co-directors Michael Beach Nichols & Christopher K. Walker join us for a conversation their remarkably even handed film on how a tight-knit community deals with their new neighbors and just how much discord and out-right hatred people are willing to accept.

For news and updates go to: firstrunfeatures.com/welcometoleith.html

“A gripping you-are-there portrait of a community under siege… as engrossing as a fictional thriller.”  - Dennis Harvey, Variety

“Fascinating, unnerving. The interviews are rich and disturbing.” – Diana Clarke, The Village Voice

“Must See. Filled with gripping showdowns and sinister agendas, the movie builds its unsettling power by depicting the struggle from both perspectives. While the delineation between good and evil holds strong, ‘Welcome to Leith’ is also creepily even-handed.” – Zack Sharf, Indiewire

“For its eerie sense of timeliness and excellent storytelling, ‘Welcome to Leith’ is one of the must-watch documentaries of 2015.” Paste Magazine