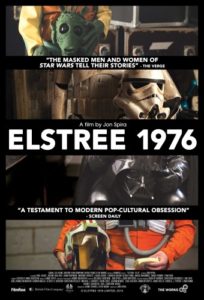 ELSTREE 1976 explores the lives of the actors and extras behind one of the most celebrated science fiction films in cinematic history: STAR WARS. A captivating look at the unheralded stars of George Lucas’s original film – from the man behind film’s most iconic villain, to the actor whose character was completely cut from the final film – the documentary delves into the eccentric community these individuals have formed and how the Star Wars franchise – which spans five decades from A NEW HOPE to THE FORCE AWAKENS –  from Millennium Falcon Pilots to uncredited Temple Guards to Darth Vader himself, ELSTREE 1976 shows the profound impact that STAR WARS had on all involved, no matter the role. Director and writer Jon Spira joins us to talk about his own journey into their world.

For news and updates go to: filmrise.com/elstree-1976/

“A sweet, quietly funny, fascinating and contemplative study of 10 character actors and extras, none of whom had any idea back in the 1970s they’d forever be defined by the one or two days they spent on the set of a sci-fi movie.” – Richard Roeper, Chicago Sun Times

“In telling a small story of bit players, the director, Jon Spira, captures a more universal picture of the droplets of fame created by a pop-culture tidal wave.” – Neil Genzlinger, New York Times

“It finds a way of proving valuable not just to fans, but to Force agnostics as well.” – Oliver Lyttelton, The Playlist