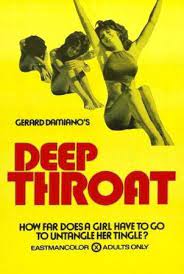 Lovelace), who derives little pleasure from conventional sex. She feels a lot of “little tingles”, but wants “Bells Ringing! Dams Bursting! and Bombs going off!” Her roommate (Dolly Sharp ) sends her to an unconventional therapist (Harry Reems), who discovers the root of her problem. Her clitoris is  deep down in her throat! The solution: a technique known as “Deep Throat.” Gerard

Damiano Jr. (son), Christar Damiano (daughter), & Robin Leonardi, daughter of adult film actress / feminist Robin Leonardi join us for a conversation on the cultural impact of the iconic film, the righteous backlash against the film, the fight for free speech triggered by the film being banned and the film’s playfully subversive celebration of a woman’s desire for sexual gratification.

For more on Deep Throat go to: damianofilms.com

The backstory –  This light, campy, comedy was one of the first full length feature films to include hard-core sex and became an instant phenomenon. Made in 1972 for a mere $25,000, it was reported to have made over $600,000,000. The response was not all positive. Conservative Christian groups and Anti-Porn Feminists sought to ban on the film. It was prosecuted on both local and federal levels resulting in many high-profile cases reaching all the way to the Supreme Court. “Deep Throat” became a household word and lent its name to the Watergate informant who brought down then President Richard Nixon. It enjoys a cult status today. “Deep Throat” has been referenced in all forms of popular culture from late night monologues to feature films. It has inspired songs, books, movies, musicals, even a rock opera.