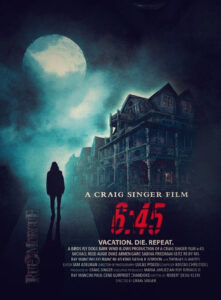 worst nightmares?And what if you were forced to relive that same day again and again? From Director Craig Singer comes a pulse-pounding, time-looping psychological thriller about a dream vacation gone very, very bad. Bobby Patterson (Michael Reed) is taking one last romantic shot at saving his rocky relationship with his girlfriend, Jules Rables (Augie Duke) on a weekend getaway to the picturesque island resort of Bog Grove. To their bewilderment, the sleepy beach town is curiously deserted, but they soon learn about its notorious and bloody history – one that’s about to repeat itself again and again… The pair’s relationship issues are quickly cast aside in order to overcome a demented cycle of terror in which they’re seemingly trapped. And no matter what great lengths they take

the South) and The 45 King (Hancock), boxing Hall of Famer Ray “Boom Boom” Mancini (The Plot Against America). Director Craig Singer (Dark Ride, Perkins 14, Animal Room) joins us for a conversation on the challenges of pulling together a film project during a pandemic, working with a talented cast and crew and how taking the time loop theme into the realm of psychological thriller / horror opened up 6:45 to the exploration of a twisted love story.

For news and updates go to: 645movie.com

Director’s statement – I was an executive with Disney, and while 6:45 is a far cry from family-friendly cartoons or happy endings, I had long thought about developing a Groundhog Day-type horror film. I’ve always been fascinated by the supernatural and the psychological and where the two intersect. My longtime writing partner Robert Dean Klein and I began working on the concept many years ago, and ironically, we finally started shooting 6:45 with a wonderful, eclectic group of young talented artists about two weeks before the world turned upside down due to COVID -19. 6:45 imagines what it would be like if the best days of your life suddenly turned into your very worst nightmare and you were forced to relive that same day again and again. But the interesting thing is that the plot, which is sort of a ‘Groundhog Day’ horror, has become rather relevant to what we have all just experienced with the pandemic — the same bad day over and over again. None of us could have predicted this, but it’s incredibly coincidental and bittersweet at the same time.

About the filmmaker – Director Craig Singer – After directing, writing and producing several Award Winning shorts and feature films (one starring Neil Patrick Harris, fresh off Doogie Howser fame), Craig Singer went on to found FanLib and My 2 Centences, companies that predicted the integration of film with internet and social media.In 2008 he sold the companies to The Walt Disney Company, where he took a creative VP role – Disney Online Originals develops and produces series for Disney Online’s sites and brands including Disney.com and Disney Family. A dynamic, Emmy nominated, award-winning filmmaker and new media executive – Singer is a results-driven, strategic thinker and media visionary with decades-long media expertise. Known as a creative leader and clear communicator with an innate ability to identify and resolve problems with a trust building empowering management style. Singer has a proven record of successful launch strategies with an exemplary record of leading creative teams for small to large privately-held and public companies. Singer has been recognized for comfortably interfacing at all levels of a vast global network andwas nominated for an Emmy in the interactive fiction category in 2008. Singer’s series have also been honored many times by both the Tellys and Webbys.

“In Craig Singer’s romantic psychodrama, a couple’s perfect (groundhog) day turns to murderous nightmare, as their weekend getaway is also an escape and a fugue” – Anton Bitel, Projected Figures