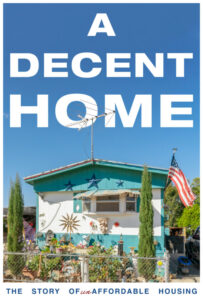 issue of affordable housing. Affordable housing in general, mobile home ownership, in particular is on the lowest rung of the American Dream. It is currently being devoured by the wealthiest of the wealthy, whose dream are we serving? A DECENT HOME examines the wealth gap through the lives of mobile home parks residents struggling to keep a roof over their heads, as it explores the urgent question – When are the rich, rich enough? Billionaires like Warren Buffet and Wall Street now control the mobile home industry in the U.S. where tens of thousands

of Americans are at the mercy of these owners and lenders who are squeezing profits from people who face the housing crisis and see mobile home parks as the last resort. Terry’s award-winning new documentary film A DECENT HOME brings the crisis to life

through mobile home park residents fighting to save their homes. Director Sara Terry (Fambul Tok, Folk) joins us for a lively conversation on the widening wealth gap that threatens to further undermine the ability of people achieve home ownership as well as how found the communities and the people who provide a humanizing perspective on the slow motion disaster their lives have become, brought on by submissive political leadership and predatory capitalism.

For more go to: adecenthomefilm.com

About the filmmaker – Director, Producer, Cinematographer Sara Terry is an award-winning filmmaker and photographer. Her first film, Fambul Tok, the story of an unprecedented grass-roots forgiveness program in Sierra Leone, premiered at SXSW in 2011. It played at more than a hundred festivals around the world and won several prizes, including the Human Spirit Award at Nashville Film Festival. Fambul Tok was supported by Sundance and Chicken & Egg, and was included on Paste magazine’s list of 100 best documentaries of all time. FOLK, her second documentary, enjoyed a successful film and music festival run, including DOC NYC, Nashville Film Festival and Bonnaroo Music Festival. Sara is a member of the International Cinematographers Guild, and has worked as a story consultant and consulting producer on more than a dozen documentaries, including the Sundance Jury Prize-winning One Child Nation (2019) directed by Nanfu Wang and Jialing Zhang, Hao Wu’s People’s Republic of Desire, Kimberly Reed’s Dark Money, Michael Collins’ and Marty Syjuco’s Almost Sunrise, and Johanna Demetrakas’  FEMINISTS: What Were They Thinking. Sara is a Guggenheim Fellow in Photography and a member of VII photo agency. She was also a 2018 Logan Fellow at the Carey Institute, where she worked on A Decent Home, and she is a 2020 Film Independent Fellow.

“Similar to Michael Moore’s Roger and Me, Terry juxtaposes the faces of those left out with those forcing the leaving… One has no qualms with Terry’s camera, the other does. There is always a human at the center, whether they want to be there or not. ” – Boulder Weekly

“At the center of Terry’s film are themes of greed and power. But perhaps the most worrisome of all is that of indifference… By interviewing the residents and telling their stories, she puts a face on the issue. It’s a fascinating and shocking exposé, a cinematic indictment..” – Hammer to Nail

“The wealth gap is at the crux of this story. It’s people with immense wealth, or the potential for immense wealth, making it off the backs of people who are just trying to survive. ” – Bree Davies, City Cast Denver

“This is a really good film about a problem that none of us probably ever think about. ” – Unseen Films