A GLITCH IN THE MATRIX ask the question, what if we are living in a simulation, and 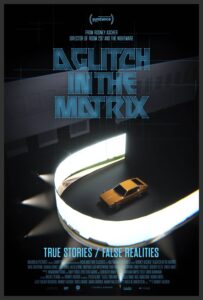 the world as we know it is not real? To tackle this mind-bending idea, acclaimed filmmaker Rodney Ascher (ROOM 237, THE NIGHTMARE) uses a noted speech from Philip K. Dick to dive down the rabbit hole of science, philosophy, and conspiracy theory. Leaving no stone unturned in exploring the unprovable, the film uses contemporary cultural touchstones like THE MATRIX, interviews with real people shrouded in digital avatars, and a wide array of voices, expert and amateur alike. If simulation theory is not science fiction but fact, and life is a video game being played by some unknowable entity, then who are we, really? A GLITCH IN THE MATRIX attempts to find out. The film introduces us to a handful of real-world testifiers who are certain that their bodies and minds are being operated by some

external game-player. Ascher, as ever an inviting, curious questioner (never one who mocks), brings a wealth of cultural and intellectual context to his latest exploration, from the videotaped musings of paranoid sci-fi giant Philip K. Dick to clips of Keanu Reeves in The Matrix and a host of bespoke animated re-creations that give eerie credence to the most outré of notions. Director Rodney Ascher joins us to talk about his paranoia-inducing, exhilarating and definitive introduction to a subject that, subscribe to it or not, involves us all.

For news and updates go to: aglitchinthematrixfilm.com

About the filmmaker – RODNEY ASCHER (Director, Editor, and Executive Producer) RODNEY ASCHER is a filmmaker known for creating documentaries that explore the subjective experience, freely appropriating the vocabularies of genre, experimental, and found-footage films along the way. His first feature, 2012’s ROOM 237 looked at The Shining through the eyes of five very different people. He visualized their wildly different interpretations of Kubrick’s classic by juxtaposing excerpts of the film with everything from Murnau’s Faust to the cover of the January 1978 issue of Playgirl magazine creating a trip down the rabbit hole. His follow up, THE NIGHTMARE was called “The Scariest Movie of the decade.” Creatively, the film completely changed tactics from Room 237’s archival-driven montage. To visualize real people’s seemingly supernatural experiences during bouts of ‘sleep paralysis’ his team filmed interviews at night in the subjects’ own bedrooms and created stylized re-enactments inspired by the interviewees’ drawings and his own personal memories of a visitation by a ‘shadowman.’ Like Room 237, it premiered at Sundance before traveling around the world including an Imax screening in Moscow. A GLITCH IN THE MATRIX is his most ambitious film yet, using multiple styles of 3D animation to illustrate the experiences and philosophies of people who suspect the world itself is not quite real.

“A Glitch in the Matrix becomes not about whether we’re living in a simulation but about the many understandable reasons someone may think this. In effect, it winds up being about the mysteries of the human experience.” – Bilge Ebiri, New York Magazine/Vulture

“’A Glitch in the Matrix’ goes for the head by way of the heart, or maybe vice versa. Superb and startling, breathtaking and compassionate.” – Bill Arceneaux, Of Those Who

“A compellingly out-there look at the possibility that we’re all avatars in a game we can’t comprehend.” – Nick Schager, The Daily Beast

“Ascher’s appropriately discombobulating stew of queasiness, comedy, and terror seems well-cued to the subject matter, even while missing a certain editorial sharpness that might have brought some of its notions into greater clarity.” – Chris Barsanti, The Playlist

“While Ascher casts a wide net, “A Glitch in the Matrix” works quite well as an overview of the various epistemological questions it raises.” – Eric Kohn, indieWire