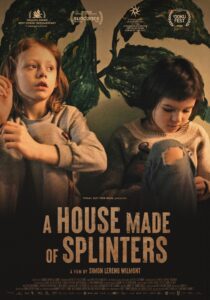 DOGS) brings his intimate and empathetic touch to a rundown halfway house in Eastern Ukraine that houses some of the country’s most vulnerable – dozens of children cramped between an unstable and chaotic home life and the over-burdened foster care system. Wilmont’s A HOUSE MADE OF SPLINTERS documents the fast-disappearing childhoods of  these vulnerable young people amidst ever-worsening political strife with adroit warmth and

unfettered access. As the film records how children suffer and survive violence and abandonment, the “orphanage” becomes a metaphor for a home, a country and a world where people entrusted with leadership fail to rise up to their responsibilities. Director, producer Simon Lereng

Wilmont joins us for a conversation on the trove of love and hope that he found amongst the dysfunction and despair that has pushed so many children into institutional living, the spark of youth that refuses to be extinguished and the caring staff that do the best they can in a corner of the world that is imploding.

For more go to: cinephil.com/a-house-made-of-splinters

About the filmmaker – Born in Copenhagen, Denmark, Simon graduated as a Documentary Film Director from The National Film School of Denmark in 2009. His first feature documentary film The Distant Barking of Dogs (2017), premiered at IDFA, and was awarded Best First Appearance. It has since gone on to win 35+ awards worldwide, among them the McBaine Documentary Feature Award at San Francisco’s SFFILM Festival, it was nominated for a European Film Award (2018), an Emmy (2020), and shortlisted for an Academy Award (2019). The film also won a Peabody Award (2020). As a director, his films include Dormitory Master (2009), Above Ground, Beneath the Sky (2008), Chikara – The Sumo Wrestler’s Son (2013) and The Fencing Champion (2014).

“On paper it all sounds so miserable, but the best element of A House Made of Splinters is the manner in which it maneuvres past the tragedy to capture a genuine reflection of childhood.” – Grant Watson, Fiction Machine

“Instead of following an archival path or adopting an interview-driven format, Wilmont’s camera opts for an observational mode which unfolds with great patience…” – Marina Ashioti, Little White Lies

“Wilmont returns to Eastern Ukraine with this delicately wrenching diary of life in a halfway house for neglected children.” – Guy Lodge, Variety

“A House Made of Splinters nourishes hope in an at times hopeless war.” – Robert Daniels, RogerEbert.com

“With a camera that feels both urgent and unassuming, Wilmont proves he’s unambiguously earned the trust of his tiny subjects of colossal worries-a feat on so many different levels that concerns both outstanding filmmaking and exemplary humanism.“ – Tomris Laffly, Harper’s Bazaar