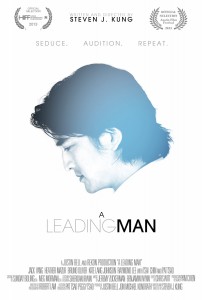 When a young and talented Chinese American actor is fired from a starring role on a television show, he attempts to salvage his career by entering into a romantic relationship with a successful casting director. Everyone is happy for rising actor GUOQIAO (GQ) – the network, his mother, his best friend – everyone except GQ himself. His is stuck playing an offensive stereotype on a television sitcom, and the day he decides to speak up for himself on set, the executive producer fires him. Struggling to pick up the pieces, he starts dating A-list casting director RACHEL. Love and work are intertwined as he gives her sex; she gives him auditions. As pressures from work, love and family come to a head, GQ must confront the hard question: How much of himself will he compromise for career success? Director and writer Steven Kung joins us for a conversation on breaking through the stereotypes and bias in the highly competitive world of commercial entertainment.

For news and updates on A Leading Man go to:http://aleadingman.com/v2/