Faye (Dale Dickey) is a lone traveler biding her time fishing, birding and 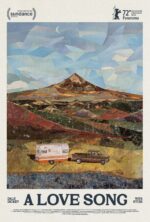 stargazing at a rural Colorado campground as she awaits the arrival of Lito (Wes Studi), a figure from her past who is navigating his own tentative

and nomadic journey across the rugged West. Like the country music that has traditionally channeled the heartbreak and resilience of Americans in search of themselves     and others, A Love Song weaves a lyrical and ultimately joyful refrain out of the transformative act of being alone —and reminds us that

the mysteries of love can transform us at any age. Director Max Walker-Silverman (Lefty/Righty) joins us for a conversation on how his homegrown film project became viable, his dream to get Dale Dickey (Winter’s Bone, Leave No Trace) and Wes Studi (Last of the Mohicans , Dances with Wolves) to sign on to A Love Song, and striking a delicate balance in the film between the bittersweet notion of love lost, hope, tenderness and cosmic comedy.

For updates go to: bleeckerstreetmedia.com/a-love-song

For screenings go to: bleeckerstreetmedia.com/theaters-a-love-song

About the filmmaker – Max Walker-Silverman grew up in Telluride and has been employed as a cowhand, literary editor and community organizer in addition to his work as a writer and director. These days, his work revolves around the kindness found in the American West and his films have been awarded the Kodak Vision Award, the SXSW Special Jury Prize and a Vimeo Staff Pick, among others. His latest work includes short films Lefty/Righty (Mountainfilm 2019) and Chuj Boys of Summer (Mountainfilm 2021).

“Make no mistake: A Love Song is, first and foremost, a love letter to Dickey… It’s the sort of performance that makes you stop taking great actors for granted.” – David Fear, Rolling Stone

““A Love Song” has the narrative economy and the sneaky emotional power of a well-crafted short story, plus a feel for isolation and rootlessness that harks back to some of the great drifter portraits of American independent cinema.” – Justin Chang, Los Angeles Times