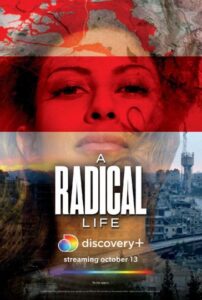 us inside the mind of Tania Joya, a former Islamic extremist once married to the highest-ranking American in ISIS. Tania was a working-class British teenager from a Bangladeshi family when her longing for purpose and belonging following the 9/11 attacks drew her to Islamic extremism. On the other side of the Atlantic, an all-American teenager from a military family named John Georgelas was also radicalizing – casting off his Greek Orthodox heritage and embracing Islamic extremism. After Tania and John met online, they quickly got married and started raising sons who they hoped would help fulfill their shared dreams of establishing an Islamic State.  But

when Georgelas relocates the family to Syria at the height of civil war, Tania is forced to make an impossible choice. Set against a backdrop of an ongoing war on terror, the rise of ISIS, and the proliferation of extremism ideologies, Tania’s unique and exclusive POV takes us inside a

journey fueled by blind devotion, false promises, and misguided idealism that leads to points of no return. Award-winning director, producer, writer Ricki Stern joins us for a conversation on meeting Tania Joya, deciding to making her the focus of a documentary, illuminating the larger context of jihadism and Islam and what we can learn from Joya’s story.

To watch go to: discoveryplus.com/a-radical-life-us

For info go to: originalproductions.com/show/a-radical-life