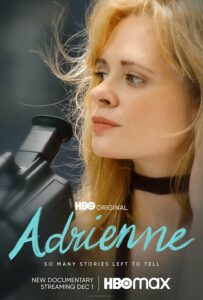 classics The Unbelievable Truth and Trust. She also wrote and directed several shorts and feature films including the critically acclaimed Waitress. A devoted young mother, her life was right on track until her husband Andy Ostroy found her murdered. With ADRIENNE Andy set out on a very personal journey to bring her back to life for viewers, to discover the truth about his wife’s murder and offer a rare

window into how a family confronts the unthinkable Adrienne celebrates  the  life and work of the late Adrienne Shelly. ADRIENNE is a personal exploration of grief. As an actor and filmmaker, Shelly strove to tell female-centric stories, including the critically acclaimed film Waitress. But Shelly would not live to see the film’s release, nor experience the smash Broadway musical

based on her work. Shelley left behind a devastated husband and 2-year-old daughter. Through candid conversations with family, friends, and colleagues–including Paul Rudd, Keri Russell and Sara Bareilles–this emotional film follows Ostroy’s poignant journey to honor Adrienne Shelly’s legacy. Director Andy Ostroy joins us for a conversation on why he chose to take on this deeply personal film, and his intention to make a film that would embody the spirit of Adrienne life and art.

For screenings and updates go to: hbo.com/movies/adrienne