From the filmmakers who brought you CLIMATE OF A HUNTER, we are excited to 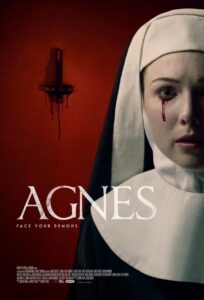 share Mickey Reece’s new film AGNES, which will be open theatrically and on VOD starting December 10 this year. AGNES is the story of a nun’s disturbing behavior as it sparks rumors of demonic possession at a remote Roman Catholic Carmelite convent. When a priest in waiting and his disillusioned mentor are sent to investigate, their methods backfire, leaving a wake of terror and trauma.  After attempting to exorcise the dark entity from Sister Agnes, Father Benjamin and Father Donaghue realize they’re

dealing with something much darker. Anchored by an array of captivating performances from Molly C. Quinn, Ben Hall, Sean Gunn, Jake Horowitz, and Chris Browning along with Agnes’ haunting images will stay with you long after the final credits. AGNES co-writer (John Selvidge) and director Mickey Reece joins us for a conversation on his expansive perspective on faith and religious dogma and how he has brilliantly subverted traditional horror story cliches with humor and humanity, turning them into something much more compelling.

For news and updates go to: magnetreleasing.com/agnes

To watch at home: magnetreleasing.com/agnes/watch-at-home

About the filmmaker – Mickey Reece is a writer/director from Oklahoma City. His style has been self described as “people talking in rooms”. Since 2008, Oklahoma filmmaker Mickey Reece has written, directed, and produced over twenty no-budget feature films, each one a unique experiment in form, genre and aesthetic, and most of which feature the same cast of eccentric actors culled from his local arts community. The “Flyover Fassbinder’s” prolific filmography includes, Climate of the Hunter, Agnes, Belle Île, Alien, Suedehead, T-Rex. His latest film, Agnes, is being released by Magnet Releasing, a film platform of Magnolia Pictures.

“The film is a thoughtful examination of the human desire for it and the accompanying hope that it may exorcise the emptiness we feel.” – Diego Semerene,

“Reece is very much an actors’ director and he draws out splendid performances from his cast in what, for all its blackly comic moments, is a gentle, thoughtful fable about faith and the role it plays in many people’s lives.” – Jennie Kermode, Eye for Film

“The temptation will be to declare that Agnes is two films when really it’s just one extraordinarily clever, unimpeachably ethical treatise on sexual repression, spiritual isolation, and the profound loneliness that derives from it. It’s so good.” – Walter Chaw, Film Freak Central

“I can only hope that as Reece’s career progresses, he gets bigger and better budgets. His vision is certainly deserving of that, and Agnes is just more proof in the pudding.” – Lorry Kikta, Film Threat

“Agnes is … a drama of isolation and melancholy, and an investigation of the ways in which faith both shields us from and disguises the harsher realities of a mundane world.” – Matt Lynch, In Review Online