Inspired by the massive use of new technologies which intersect with 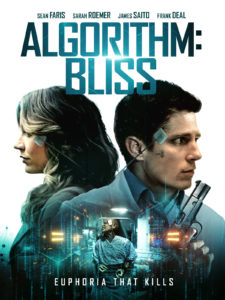 psychopharmacology for therapeutic purposes. Algorithm: Bliss takes a look into how humanity and technology intersect and examines the unintended consequences of applications and innovations that come out of good intentions. Algorithm: Bliss explores where and how lines of morality get blurry once people are dealing with the reality of the noble aspirations for a product versus the potentially dangerous reality of implementation.  It’s Edgar Allen Poe’s “The Tell-Tale Heart” for a digital age. Vic Beckett (Sean Faris) is a brilliant

researcher, creates the ultimate App that taps into the pleasure center of the brain and transmits a feeling of nirvana to the user. Instant celebrity and unlimited commercial applications corrupt his altruistic intention and when

problems arise with his creation, he justifies doing whatever is necessary to keep the app online. Algorithm: Bliss stars Sean Faris (Never Back Down), Sarah Roemer (Disturbia), Frank Deal (The Bourne Legacy), James Saito (Life Of Pi), Frank Deal (The Outsider), and Kimberley Locke (American Idol). Algorithm: Bliss is co-directed by Dena Hysell-Cornejo and Isak Borg, from a screenplay by Borg and Golan Ramraz (Iron Man).

For news and updates go to: greenappleent.com/project/algorithm-bliss