ALL IN: THE FIGHT FOR DEMOCRACY is a riveting examination of voter 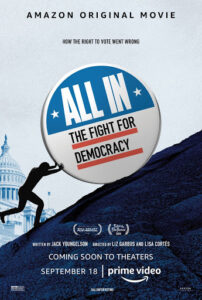 suppression in the United States of America. The film weaves rich archival storytelling with the personal experiences of experts, activists, and would-be voters deprived of their rights. Current activism as well as historical insight expose what corrupted our democracy from the moment it was founded. Every time we the people take a step toward a more just and equal nation — granting rights to the disenfranchised, from women’s suffrage to desegregation — new forces and obstacles emerge that require us to fight for the right to vote once again. Stacey Abrams, the former Minority Leader of the Georgia House of Representatives and the first female African-American major-party gubernatorial nominee, offers an insider’s look at the patchwork of laws and barriers designed to 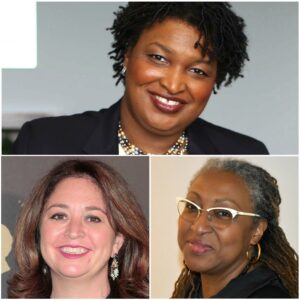 hinder voting. Many U.S citizens remain unaware of this dangerous threat to their basic right to wield their power and raise their voices at the polls.ALL IN: THE FIGHT FOR DEMOCRACY explores fundamental questions: Who gets to participate in our democracy, and who is pushed aside? How can we all fight back? Voting is the cog

that makes the machinery of democracy work — and if the machinery breaks for some, it will eventually break for all. Co-directors Liz Garbus (Nothing Left Unsaid, I’lll Be Gone in the Dark, Lost Girls) and Lisa Cortes (The Apollo, The Remix: Hip Hop X Fashion, The Woodsman) join us to talk about how incredibly important voting rights are in determining the outcome of our elections and out quickly they can be taken away.

ALL IN: THE FIGHT FOR DEMOCRACY will open in select theaters on September 9th and will be available on Amazon Prime Video on September 18th.

About the filmmaker – Liz Garbus is a two-time Academy Award®-Nominee, two-time Emmy Winner, Peabody Winner, Grammy Nominee, DGA Nominee, BAFTA-nominated director. LOST GIRLS (Netflix, 2020) is Garbus’ narrative feature debut, starring Amy Ryan, Gabriel Byrne, and Thomasin McKenzie. When Mari Gilbert’s daughter disappears, police inaction drives her own investigation into the gated Long Island community where Shannan was last seen. Her search brings attention to over a dozen murdered sex workers Mari will not let the world forget. LOST GIRLS will premiere at the 2020 Sundance Film Festival and then will be released in theaters and on Netflix.For more on the work of Liz Garbus go to: storysyndicate.com/work

About the filmmaker – Lisa Cortes Executive producer After graduating she went into the music business where she worked with Russell Simmons and Rick Rubin, the founders of Def Jam. Cortes then joined the staff at Mercury Records. After leaving the music industry, Cortes turned her interests to film. She enrolled at the School of Visual Arts in New York and later the New York Film Academy. A producer and close friend, Lee Daniels, was producing Monster’s Ball and Cortes and Daniels together subsequently collaborated on movies such as Woodsman (2004), Shadowboxer (2005), Tennessee (2008), and Precious (2009). Cortes founded her own company, Cortes Films in 2010. Cortes Films has produced two films Happy Birthday to a Beautiful Woman: a Portrait of My Mother, a film about Mickalene Thomas’ mother and her struggle with aging and kidney disease, and Kwaku Ananse a film about West African fables of Kwaku Ananse and a young woman named, Nyan Koronhwea, attending her estranged father’s funeral while trying to come to terms with her father’s double life.

“A documentary of supreme relevance that has the effect, at once chilling and rousing, of a political cautionary tale.” – Owen Gleiberman, Variety

“All In: The Fight for Democracy is a must-watch documentary…” – Danielle Solzman, Solzy at the Movies

“Voter suppression is broken down within an inch of its life with this informative, no holds barred documentary from Liz Garbus and Stacey Abrams. Our vote has never counted more and been more crucial. Don’t let you democracy be robbed!” – Carla Renata, The Curvy Film Critic

“Stacy Abrams’ urgent, powerful , and compelling documentary about voter rights and the attempt to suppress them could and should have a real world impact this election season.” – Pete Hammond, Deadline Hollywood Daily