ALL THAT BREATHES takes us to one of the world’s most populated cities, where 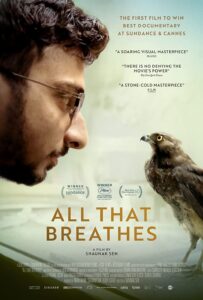 cows, rats, monkeys, frogs, and hogs jostle cheek-by-jowl with people where the “Kite  Brothers,” Nadeem Shehzad and Mohammad Saud, care for thousands of these majestic black kite birds of prey that drop daily from New Delhi’s smog-choked skies. As meat-eaters, the black kites are rejected by the city’s bird hospitals. Against a backdrop of environmental toxicity  and civil unrest escalate, the relationship between this family and the neglected kites

forms a poetic chronicle of the city’s collapsing ecology and deepening social fault lines. ALL THAT BREATHES had its world premiere at the 2022 Sundance Film Festival and it is the only film ever to have

won both the Grand Jury Prize at the Sundance and Best Documentary at the Cannes Film Festival. Director Shaunak Sen is a filmmaker and film scholar based in New Delhi, India. His first feature, CITIES OF SLEEP (2016), explored that city through the lens of sleep and was screened internationally, earning six international documentary awards.

For more info and screenings go to: hbo.com/all-that-breathes

About the filmmaker – Shaunak Sen is a filmmaker and film scholar based in New Delhi, India. Cities of Sleep (2016), his first feature-length documentary, was shown at various major international film festivals (including DOK Leipzig, DMZ Docs and the Taiwan International Documentary Festival, among others) and won 6 international awards. Shaunak received the IDFA Bertha Fund (2019), the Sundance Documentary Grant (2019), the Catapult Film Fund (2020), the Charles Wallace Grant, the Sarai CSDS Digital Media fellowship (2014), and the Films Division of India fellowship (2013). He was also a visiting scholar at Cambridge University (2018) and has published academic articles in Bioscope, Wide screen and other journals.

“…An immersive, haunting documentary portrait… with intimacy, a great score and some fantastic macro cinematography… there is no denying the movie’s power or its subject; there’s also no denying the heartbreak of its images.”  – Manohla Dargis, The New York Times

“As gorgeous as it is ambitious, as stirring as it is terrifying. Sen has a patient, observational style with his camera: He is often content to let us watch a desolate street scene, or a group of people eating dinner without really talking to one another. It’s an immersive tactic, allowing us as viewers to fall into the cadence of the world being presented onscreen.” – Bilge Ebiri, Spirituality & Health

“With the great documentary cinematographer Benjamin Bernhard, Sen creates images as sublime to our eyes as the sight of these huge black birds flying through a sky darkened with pollution are to the brothers. “  – Amy Taubin, Artforum

“ALL THAT BREATHES (is) a vital and transfixing work of urban ecology about two Muslim brothers who share an uncommonly holistic perspective of the world around them.” – David Ehrlich, IndieWire