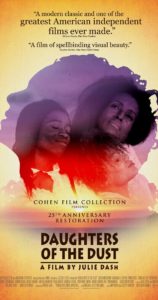 Set in the legendary Sea Islands off the South Carolina/Georgia coast in 1902, Julie Dash’s DAUGHTERS OF THE DUST (1991) follows a Gullah family (descendants of West African slaves) on the eve of its migration to the North. Led by a group of women who carry with them ancient African traditions, the extended family readies itself to leave behind friends, loved ones and their insulated way of life. Can these women hold fast to their sacred religious beliefs and customs, or will their world be swept away in the course of a new century? This richly costumed drama, structured in tableaux to reflect the art and icons of African tradition, testifies movingly to the secret celebrations and packed-away sorrows of African-American women. These vital images were introduced to a new generation on a massive scale earlier this

year, when the film was heavily referenced in Beyoncé’s visual album, Lemonade. DAUGHTERS OF THE DUST became the first film by an African-American woman ever to receive widespread theatrical release. Enriched by John Barnes’s eclectic score and Arthur Jafa’s Sundance Film Festival-prize-winning cinematography, listed in the National Film Registry DAUGHTERS OF THE DUST was hailed as one of the most visually and sonically ravishing in American independent cinema. Director Julie Dash joins us for a conversation on her sweeping, absorbing and poetic homage to African culture.

For news and updates go to: daughters-of-the-dust

“Every image, every moment is a full creation. Dash is one of the heroines of the modern cinema.” – Richard Brody, The New Yorker

“Daughters of the Dust abounds with stunning motifs and tableaux, the iconography seemingly sourced from dreams as much as from history and folklore.” – Melissa Anderson, Village Voice

“Its examination of a bygone way of life is so patient and evocative, so beholden to its own storytelling conventions and rhythms, that watching it is a bit like submitting to a form of time travel” – Justin Chang, Los Angeles Times