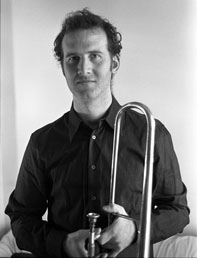 Jacob Garchik, multi-instrumentalist and composer, was born in San Francisco and lived in New York since 1994. At home in a wide variety of styles and musical roles, he is a vital part of the Downtown and Brooklyn scene, playing trombone with the Lee Konitz Nonet, Ohad Talmor/Steve Swallow Sextet, Mary Halvorson Octet, and the John Hollenbeck Large Ensemble. He has released 4 albums as a leader including “The Heavens: the Atheist Gospel Trombone Album”. He co-leads Brooklyn’s premiere Mexican brass band, Banda de los Muertos. Since 2006 Jacob has contributed dozens of arrangements and transcriptions for Kronos Quartet of music from all over the world. He composed the score 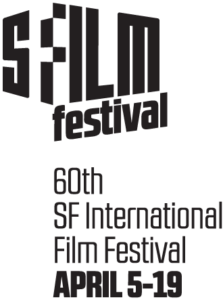 for Kronos for the documentary “The Campaign” (2013), and “The Green Fog” (2017) directed by Guy Maddin. He has created arrangements for vocalists Anne Sofie von Otter, Angelique Kidjo, Laurie Anderson, Rhiannon Giddens, kd lang, Natalie Merchant, Tanya Tagaq, and Alim Qasimov. Garchik returns to San Francisco Sunday, April 16 for a live performance during the 60th San Francisco International Film Festival’s closing night screening of The Green Fog – A San Francisco Fantasia. Commissioned by the San Francisco Film Society, that reimagines one of the most iconic San Francisco films of all time, Vertigo, as a visual collage by award-winning filmmaker and cultural iconoclast Guy Maddin. The Green Fog will screen at the historic Castro Theatre on Sunday, April 16 at 7:00 pm, followed by the Closing Night Party at Mezzanine. Jacob Garchik joins us for a conversation on collaborating with director Guy Maddin and his own musical journey.

For news and updates go to: jacobgarchik.com

For news and updates on the 2017 San Francisco International Film Festival go to: sffilm.org/festival