Hilma af Klint was an abstract artist before the term existed, a 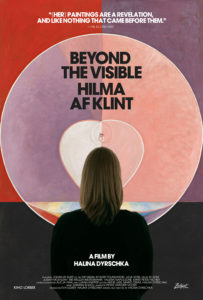 visionary, trailblazing figure who, inspired by spiritualism, modern science, and the riches of the natural world around her, began in 1906 to reel out a series of huge, colorful, sensual, strange works without precedent in painting. The subject of a recent smash retrospective at the Guggenheim Museum, af Klint was for years an all-but-forgotten figure in art historical discourse, before her long-delayed rediscovery. Halina Dryschka’s dazzling, course

correcting documentary describes not only the life and craft of af Klint, but also the process of her mischaracterization and her erasure by both a patriarchal narrative of artistic progress and capitalistic determination of artistic value. Director Halina Dyrschka joins us to talk about her own journey in making this compelling and powerful film and the importance of shattering the art world narrative of marginalizing woman artists.

About the filmmaker – Director Halina Dyrschka was born in Berlin, Germany and is active as a director and

producer. After studying acting, classical singing and film production she founded the company AMBROSIA FILM in Berlin. Her first film as a director the short film “9andahalf’s Goodbye” was shown at over 40 film festivals worldwide and has won several awards. BEYOND THE VISIBLE – HILMA AF KLINT marks her directorial feature documentary debut and is the first and only film on the Swedish artist Hilma af Klint.

For news, screenings and updates go to: zeitgeistfilms.com/film/beyondthevisiblehilmaafklint

“One needn’t have a B.F.A. to see the striking resemblances between Klint’s works, painted years earlier, and those of vastly more lauded male artists who came later.” – Kenneth R. Morefield, 1More Film Blog

“Beyond the Visible should reach the general public as a needed and welcome corrective, shining a light on yet another dynamic, trailblazing woman denied her rightful place in history, until now.” – Loren King, AWFJ Women on Film

“Beyond the Visible: Hilma af Klint reminds us that just because we do not yet know them, does not mean that there are not more than enough women artists to entirely populate their own club of geniuses – and that in itself makes the film worthwhile.” – Lee Jutton, Film Inquiry