SELAH AND THE SPADES tells the beautifully complex story of an insulated world at an elite Pennsylvania boarding school, Haldwell, 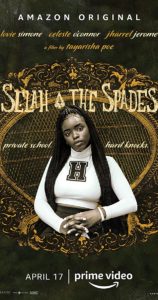 where the student body is run by five factions. Seventeen-year-old Selah Summers (Lovie Simone) runs the most dominant group, the Spades, with unshakable poise, as they cater to the most classic of vices and supply students with coveted, illegal alcohol and pills. Tensions between the factions escalate, and when Selah’s best friend/right hand Maxxie (MOONLIGHT’s Jharrel Jerome) becomes distracted by a new love, Selah takes on a protégée, enamored sophomore Paloma (Celeste O’Connor), to whom she imparts her wisdom onruling the school. But with graduation looming and Paloma proving an impressively quick study, Selah’s fears turn sinister as she grapples with losing the control by which she defines herself. In her feature debut, writer/director Tayarisha Poe immerses us in a heightened depiction of teenage politics. This searing character study encapsulates just how intoxicating power can be for a

teenage girl who acutely feels the threat of being denied it. Exciting newcomer Lovie Simone’s performance beautifully embodies both Selah’s publicly impeccable command and the internal fears and uncertainty that drive it. Director and writer Tayarisha Poe joins us for a lively conversation on her own high school experience, The Godfather, the importance of showcasing powerful young women and the remarkably talented actors who make Selah and the Spades so riveting.

Selah and the Spades premieres April 17 on Amazon Prime

About the filmmaker: Director / writer Tayarisha Poe is a storyteller from West Philadelphia

who believes that all stories are inherently multi-sensory and multi-dimensional, and thus should be told that way. She was chosen as one of the 25 New Faces by Filmmaker Magazine in 2015, and in 2016 she received the Sundance Institute’s Knight Foundation Fellowship. In 2017 she was selected for the Sundance Screenwriters and Directors Labs. Her first feature film, SELAH AND THE SPADES, premiered at the 2019 Sundance Film Festival.

For more about Tayarisha Poe go to: tayarishapoe.com

“Selah and the Spades shows a great deal of promise for writer/director Tayarisha Poe, who demands your attention with style and story in her directorial debut.” – Nick Allen, RogerEbert.com

“Quietly confident in its unconventional yet clear point of view, Selah and the Spades signals a bright future for a promising young filmmaker.” – Beandrea July, Hollywood Reporter

“The level of craft in Poe’s feature debut exceeds that of directors with more experience and portends a long career with more wonderful art to come.” – Bradley Gibson, Film Threat

“More than the sheer delight of watching a powerful Black girl, Selah and the Spades is an earnest celebration of youth and power -something long-reserved for white teens while excluding young people of color.” – Aramide Tinubu, Shadow and Act