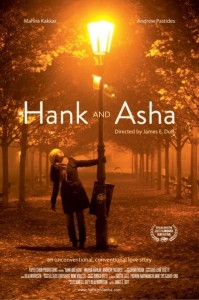 A romance, the film tells the story about two young people – an Indian woman studying in Prague – and a lonely New Yorker  – using technology in a specific way to help tell their story. They begin an unconventional correspondence through video letters – two strangers searching for human connection in a hyper-connected world. When their relationship deepens, they must decide whether or not to meet face to face. Winner of the Audience Award for Best Narrative Feature at the 2013 Slamdance Film Festival, “Hank and Asha” is a film about identity, longing, and the irresistible appeal of entertaining life’s what-ifs. Director / Producer / Writer James E. Duff and Producer Julia Morrison talks about making the jump from teaching film in Kenya, to making  his feature film debut based in New York City.

For more news on Hank and Asha go to: http://www.hankandasha.com/

“extremely entertaining… Mahira Kakkar[‘s] charismatic joy and energy drives the film forward…. It’s the type of performance that can’t help but make you smile and, when things do get more emotional, you’re already so engaged with her character that you feel that much more for Asha. … In the end, Hank and Asha is a very entertaining film that is far more interesting in its execution than it may seem in simple explanation. It has the feel of a crowd-pleaser, and it wears its heart on its sleeve. With a character like Asha, how could it not?” – Mark Bell, Film Threat

“Hank & Asha might be the best modern love story since Once or Before Sunset. It’s beautifully written, tender, honest, funny and sweet without veering into melodramatic or schmaltzy territory. This is the rare love story that has both style and substance.” The NYC Movie Guru