A celebration of the transformative power of music, and the bonds that develop 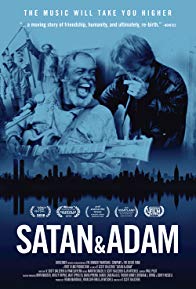 when artists collaborate and worlds collide, the film follows Satan & Adam, a blues duo and a fixture on Harlem’s sidewalks in the late 1980s and early 1990s. Director V. Scott Balcerek pulls together over two decades of documentary footage to chart the duo’s trajectory from busking in the streets of Harlem, where they were happened upon by U2 who were filming for their Rattle and Hum documentary, to bigger and bigger stages, depicting the challenges that both had to overcome to keep Satan & Adam and their friendship together. Playing for years with artists including James Brown, King Curtis and Big Maybelle, Sterling Magee experienced the music industry’s exploitation of black musicians

firsthand. So he walked away to play on the Harlem streets for “his people.” Reborn as Satan, he spread his gospel of freedom and became a New York City legend. When a white Jewish Ivy league scholar and musician named Adam Gussow asked if he could join him one day, both their lives took a powerful turn. Adam put aside the ivory tower life to play in the streets, and Sterling’s embrace of his younger apprentice 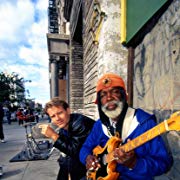 forged a sound that thrust him back in the spotlight. But life on the road took its toll on the duo, and suddenly Sterling vanished without a trace. The separation would test both men’s courage, and their journey to find each other again a tale of tragedy, survival and miraculous rebirth. Director V. Scott Balacerek stops by to talk about a 23 year long journey chronicling the twists and turns of two dedicated musicians and an unlikely friendship.

For news and updates go to: satanandadamfilm.com

April 19 – Opening in Los Angeles – Glendale Laemmle Theatre – Director V. Scott Balcerek will participate in Q&A’s following the 7:30 pm shows on Friday, 4/19, and Saturday, 4/20 at the Glendale and on Tuesday, 4/23 at the Monica Film Center. Producer Ryan Suffern will join him on Saturday.

“John Sayles once told me that he thinks it’s music, more than anything, that has the power to bring Americans together across racial lines. Satan & Adam speaks to just such a power and goes beyond that to show us what it’s worth.” – Jennie Kermode, Eye for Film

“The best third act of any music doc since Searching for Sugar Man.” – JB Spins

“Will move your feet and soul.” – Unseen Films

“Passionate and moving… Nothing could prepare me for what I would discover.” Film Inquiry

“Inspiring… reminds you what it means to be human.” – Nonfics