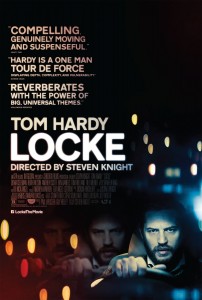 Ivan Locke (Hardy) has worked diligently to craft the life he has envisioned, dedicating himself to the job that he loves and the family he adores. On the eve of the biggest challenge of his career, Ivan receives a phone call that sets in motion a series of events that will unravel his family, job, and soul. All taking place over the course of one absolutely riveting car ride, LOCKE is an exploration of how one decision can lead to the complete collapse of a life. Directed by acclaimed filmmaker Steven Knight (EASTERN PROMISES, DIRTY PRETTY THINGS) and driven by an unforgettable performance by Tom Hardy, LOCKE is a thrillingly unique cinematic experience of a man fighting to salvage all that is important to him. Director Knight joins us to talk about pulling together the cinematic high-wire act of doing an entire film with one actor and one setting. And the satisfaction that come with getting it right.

For news and updates on Locke go to: http://locke-movie.com/

“A powerhouse of suspense and fierce emotion.” – ROLLING STONE

“reverberates with the power of big, universal themes.” – TIME OUT

“Hardy is mesmerizing, with the gravitas of an old-fashioned dramatic actor and the naturalism of a modern star.” – INDIEWIRE