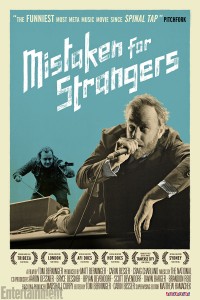 Hailed by Michael Moore as “one of the best documentaries about a band that I’ve ever seen” and by Pitchfork as “the funniest, most meta music movie since SPINAL TAP,” MISTAKEN FOR STRANGERS is a truly hilarious, unusual, and moving film about two brothers, Matt and Tom Berninger. Matt, the lead singer of the critically acclaimed rock band The National, finally finds himself flush with success. His younger brother, Tom, is a loveable slacker – a filmmaker and metal-head still living with his parents in Cincinnati. On the eve of The National’s biggest tour to date, Matt invites Tom to work for the band as a roadie, unaware of Tom’s plan to film the entire adventure. What starts as a rock documentary soon becomes a surprisingly honest portrait of a charged relationship between two brothers, and the frustration of unfulfilled creative ambitions. Tom and Matt join us to talk about the pursuit of artistic aspirations, family and expectations.

Available at theatres nationwide and on iTunes and VOD

For more on how to watch Mistaken for Strangers go to: mistakenforstrangersmovie.com

“Funny, touching, and genuinely moving, this deeply personal approach plays out like a curious amalgamation of a conventional band biopic with a touch of This Is Spinal Tap thrown in for good measure. By wearing his heart on his sleeve and exhibiting an unflinching degree of honesty and passion, Berninger’s Mistaken for Strangers finds itself traversing the usual banal hero worshipping and artistic reverie of an orthodox music doc.” – Cine Vue

“Though self acknowledged humor very much pervades Mistaken For Strangers, it is an overwhelming honesty and heartwarming brotherly admiration that leaves a lingering resonance in its wake.” – IONCINEMA

“The film manages to defy every preconception…  The best documentary we have seen all year.” – New York Observer

“Strangers could not be more compelling” – Rolling Stone