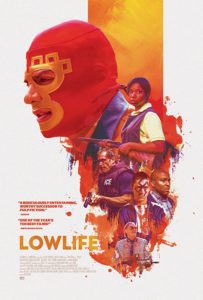 hired muscle for a local crime boss. CRYSTAL, a recovering addict desperate enough to arrange a black market kidney transplant to save her husband’s life. And

RANDY, a loveable two-strike convict fresh out of prison, cursed with a full-face swastika tattoo and a best friend guilting him into some hair-brained kidnapping scheme. In LOWLIFE we follow  the sordid lives of these small-time criminals collide, as they fight tooth and nail to save a pregnant woman from a certain, and surely gruesome, death. Director Ryan Prows joins for a lively conversation on his hard-charging, high-energy debut feature film.

For news and updates  go to: lowlifethemovie.com

“The result is a film that’s as brutal in its imagery as it is funny in its execution.” – Jared Mobarak, Film Stage

“A captivating feature debut despite some missteps, it flashes back to a time when every other filmmaking newcomer wanted to be Quentin Tarantino; surprisingly, it does not provoke the weary eye-rolling that greeted so many of those films.” – John DeFore, Hollywood Reporter

“A movie with the sole purpose of an adrenalin rush, designed to strap you to your seat, entertain you, and spit you back into reality, exhausted but satisfied.” – Brian Tallerico, RogerEbert.com

“Lowlife is such a wild ride that any cinema showing it might want to consider installing seat belts on their chairs. Every second is electrifying.” – Mike McGranahan, Aisle Seat

“Throughout its swirling stories, Lowlife does an impeccable job of teasing, pulling back, and delivering, whether it be violence, drama, or the intermittent moment of temporary joy.” – Scott Beggs, Nerdist