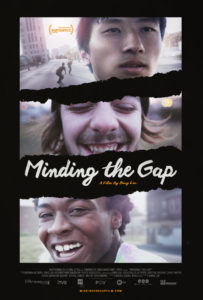 by decades of recession. In his quest to understand why he and his friends all ran away from home when they were younger, Bing follows 23-year-old Zack as he becomes a father and 17-year-old Keire as he gets his first job. As the film unfolds, Bing is thrust into the middle of Zack’s tumultuous relationship with his girlfriend and Keire’s inner struggles with racial identity and his deceased

father. While navigating a complex relationship between his camera and his friends, Bing explores the gap between fathers and sons, between discipline and domestic abuse, and ultimately that precarious chasm between

childhood and becoming an adult. Director Bing Liu joins us for a lively conversation on masculinity, adulthood, the joy of skateboarding and the crippling legacy of domestic violence.

For news and updates go to: mindingthegapfilm.com

“One of the year’s great, small treasures, Bing Liu’s extraordinary documentary “Minding the Gap” is like a deluxe skateboarding video, yet so much more.” – Jeffrey M. Anderson, San Francisco Examiner

“”Minding the Gap” is a personal documentary of the highest sort, in which the film’s necessity to the filmmaker-and its obstacles, its resistances, its emotional and moral demands on him-are part of its very existence.” – Richard Brody, New Yorker

“With infinite sensitivity, Mr. Liu delves into some of the most painful and intimate details of his friends’ lives and his own, and then layers his observations into a rich, devastating essay on race, class and manhood in 21st-century America.” – A.O. Scott, New York Times

“Even some of the best coming-of-age films cannot capture the beautiful and awful tangible qualities of real life that may only exist in documentaries, and Bing Liu has caught lightning in a bottle.” – Musanna Ahmed, Film Inquiry