Based on the arresting true story of the Executioner of Emsland, The Captain follows a German army deserter, Willi Herold (Max Hubacher), after he finds an 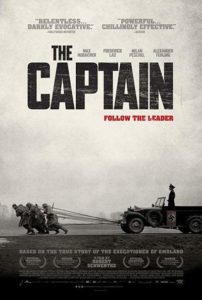 abandoned Nazi captain’s uniform in the final weeks of World War II. Emboldened by the authority the uniform grants him, he amasses a band of stragglers who cede to his command despite the suspicions of some. Citing direct orders from the Fuhrer himself, he soon takes command of a camp holding German soldiers accused of

desertion and begins to dispense harsh justice. Increasingly intoxicated by the unquestioned authority, this enigmatic imposter soon discovers that many people will blindly follow the leader, whomever that happens to be. Simultaneously a historical docudrama and sociological examination with undertones of the absurd, The Captain presents fascism as something of a game to be played by those most gullible and unscrupulous. Director Robert Schwentke stops by for a conversation on the troubling implications of this tale of myopic madness sanctioned by a psychotic regime on the verge of collapse.

For news and updates go to: musicboxfilms.com/The Captain

“It compels our attention with a remorseless, gripping single-mindedness, presenting Naziism as a communicable disease that smothers conscience, paralyzes resistance and extinguishes all shreds of humanity.” – Jeannette Catsoulis, The New York Times

“Schwentke intends for these actions to parallel what Wehrmacht participated in against Jews and Roma …This astute film is an excoriating portrait of Nazism or fascism.” – Nora Lee Mandel, Film-Forward

“We are left to contemplate this vision of Fascism as a machine that, once turned on, can sustain itself even in the absence of explicit direction from above.” – David Edelstein, New York Magazine / Vulture