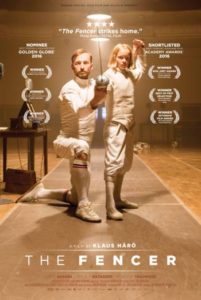 In Klaus Härö’s beautifully rendered tale a young man, Endel Nelis, arrives in Haapsalu, Estonia, in the early 1950s. Having left Leningrad to escape the secret police, he finds work as a teacher and founds a sports club for his students. Endel becomes a father figure to his students and starts teaching them his great passion – fencing, which causes a conflict with the school’s principal. Envious, the principal starts investigating Endel’s background… Endel learns to love the children and looks after them; most are orphans as a result of the Russian occupation. Fencing becomes a form of self-expression for the children and Endel becomes a role model. The children want to participate in a national fencing tournament in Leningrad, and Endel must make a choice: risk everything to take the children to Leningrad or put his safety first and disappoint them. Director Klaus Härö (The New Man, Mother of Mine, Elina – As If I Wasn’t There) joins us to talk about his heart-wrenching, superbly crafted true story about character and resistance in a time of political repression.

For news and updates go to: thefencermovie.com

“This well-acted, smoothly crafted drama tells a story of cross-generational bonding in the face of historical oppression, in touching if unsurprising fashion.” – Justin Chang, Variety

“An affecting portrait of a decent man who risks his life to uphold a bond of trust with his students. Though squarely in the tradition of Dead Poets Society and The Bad News Bears, the film offers higher stakes and, consequently, a bigger payoff.” – Marilyn Ferdinand, Chicago Reader