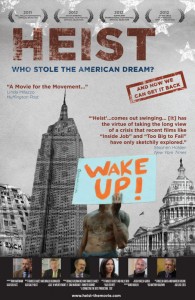 Heist: Who Stole the American Dream? reveals how American corporations orchestrated the dismantling of middle-class prosperity through rampant deregulation, the outsourcing of jobs, and tax policies favoring businesses and the wealthy. The collapse of the U.S. economy is the result of conscious choices made over thirty five years by a small group: leaders of corporations and their elected allies, and the biggest lobbying interest in Washington, the U.S. Chamber of Commerce. To these individuals, the collapse is not a catastrophe, but rather the planned outcome of their long, patient work. For the rest of the country, it is merely the biggest heist in American history. The co-directors, Frances Causey and Donald Goldmacher will stop by to talk the hard truth contained in this wake up call to the American people.