In 2010, Taiji, a sleepy fishing town in Japan, suddenly found itself in the worldwide media spotlight. THE COVE, a documentary denouncing the town’s longstanding whale 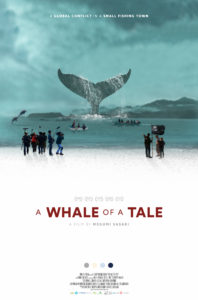 and dolphin hunting traditions, won an Academy Award and almost overnight, Taiji became the go-to destination and battleground for activists from around the world. Can a proud 400-year-old whaling tradition survive a tsunami of modern animal-rights activism and colliding forces of globalism vs. localism? A WHALE OF A TALE reveals the complex story behind the ongoing debate. Told through a wide range of characters including local fishermen, international activists and an American journalist (and long time Japanese resident), this powerful documentary unearths a deep divide in eastern and western thought about nature and wildlife and cultural sensitivity in the face of global activism. In 2008, Filmmaker

Megumi Sasaki directed and produced her first feature-length documentary HERB & DOROTHY, about legendary New York art collectors Herb and Dorothy Vogel.  The film went on to win top honors at many international film festivals and was released theatrically nationwide and as a part of PBS’s Independent Lens series. In 2013, Megumi completed the highly anticipated follow-up HERB & DOROTHY 50X50, focusing on the next (and final) chapter in the lives of the beloved couple. Director Megumi Sasaki joins us for a frank and wide-open conversation on the why she felt that telling this story was important and critical to understanding another side of a complex issue that has implication far beyond the shores of Tajii.

For news and updates go to: awhaleofatalefilm.com

“A Whale of a Tale is a corrective, countering The Cove‘s agitprop sensationalism with a measured and nuanced curiosity.” – The Village Voice

“A Whale of a Tale is a great spectacle that presents the other side of a matter that was too one-sided until now, and that is where its biggest value lies.”– Asian Film Vault

“An illuminating examination of the still-ongoing conflict.” – Film Journal International