NICO, 1988 features a tour de force performance from Trine Dyrholm’s as the aging Nico (aka Christa Päffgen), interpreting rather than impersonating the f 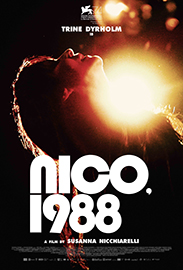 amed singer-songwriter as she approaches 50. Leading a solitary existence in Manchester Nico’s life and career are on the ropes, a far cry from her glamorous days as a Warhol superstar and celebrated vocalist for The Velvet Underground. Nico’s new manager Richard (John Gordon Sinclair) convinces her to hit the road again and tour Europe to promote her latest album. Struggling with her demons and the consequences of a muddled life, she longs to rebuild a relationship

with the son Ari (Sandor Funtek) she lost custody of long ago. A brave and uncompromising musician, Nico’s is the story of an artist, a mother, and the woman behind the icon. Director Susanna Nicchiarelli joins us to talk about Trine Dyrholm’s raw performance and her own unvarnished look into the post-iconic world of NICO and into the tortuous journey that Christa Päffgen took, as an artist and mother, towards the person she knew she wanted to be.

For news and updates go to: nico1988.com

“Writer/director Susanna Nicchiarelli and star Trine Dyrholm craft a late-career biopic that acts not only as a portrait of a complex figure, but recognises the considerable toll of daring not to conform.” – Sarah Ward, Screen International

“Nicchiarelli dives deeply into the life of a tragic but remarkable woman, memorably portrayed by Danish actress and singer Trine Dyrholm as an unpleasant, hurtful junkie plagued with memories and regrets.” – Deborah Young, Hollywood Reporter

“Nico, 1988 shows us how extraordinary the biopic can be when it is freed from unnecessary restrictions to embrace the idiosyncrasies of its subject.” – Lee Jutton, Film Inquiry

“Remarkably personal, with a bold, gritty edge that echoes the intensity of both Nico’s singing and Trine Dyrholm’s thunderous performance.” – Rich Cline, Shadows on the Wall