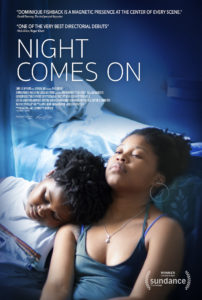 story of Angel LaMere. released from juvenile detention on the eve of her 18th birthday. Haunted by her past, Angel embarks on a journey with her 10-year-old sister to avenge her mother’s death. NIGHT COMES ON won the 2018 Sundance NEXT Innovator Prize

that features riveting performances by Dominique Fishback (Angel) and Tatum Marilyn Hall (Abby). Director and writer Jordana Spiro joins us for a conversation about her remarkably nuanced tale of pain, loss, empathy and revenge.

For news and updates go to: Night Comes On

“A strikingly tender handling of such a tough albeit totally human tale. The amount of empathy within Night Comes On is a spectacle itself.” – Nick Allen, RogerEbert.com

“‘Night Comes On’ is, true to its title, blanketed in a dim, crepuscular state of waiting. Fishback, her film career unfurling clearly before her from scene to scene, blazes a way out of it.” – Guy Lodge, Variety

“But just below the surface, Night Comes On is a careful, layered portrait of a person navigating her uncertain way through a sea of trouble, and we come to care about her and admire her spirit.” – Kelly Vance, East Bay Express

“Night Comes On will stick with you long after turning it off, yearning for more female-driven stories like this one and hoping they become just as poignant as other films to broader audiences.” – Jaime Broadnax, Black Girl Nerds