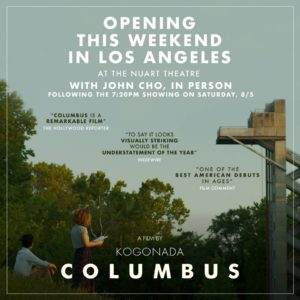 When a renowned architecture scholar falls suddenly ill during a speaking tour, his son Jin (John Cho) finds himself stranded in Columbus, Indiana – a small Midwestern city celebrated for its many significant modernist buildings. Jin strikes up a friendship with Casey (Haley Lu Richardson), a young architecture enthusiast who works at the local library. As their intimacy develops, Jin and Casey explore both the town and their conflicted emotions: Jin’s estranged relationship with his father, and Casey’s reluctance to leave Columbus and her mother. With its naturalistic rhythms and empathy for the complexities of families, debut director Kogonada’s COLUMBUS unfolds as a gently drifting, deeply absorbing conversation. With strong supporting turns from Parker Posey, Rory Culkin, and Michelle Forbes, COLUMBUS is also a showcase for its director’s striking eye for the way physical space can affect emotions. Director Kogonada s a proud immigrant, born in Seoul and raised in the Midwest. He has been noted by Filmmaker Magazine (25 New Faces of Independent Film) and The New Yorker for his visual work and film criticism commissioned by the Criterion Collection and Sight & Sound. He joins us to talk about his emotionally powerful, visually stunning feature film debut.

“The seeming miracle of Columbus is its mixture of formal precision with a philosophical grasp of human mystery.” – Chuck Bowen, Slant Magazine

“‘Columbus’ is a feast for the eyes, but its more lasting impression is on the heart.” – Kate Erbland, IndieWire

“The movie leaves quite a bit to the eye of the beholder, but it’s always worth looking at.” – Ben Kenigsberg, The New York Times

“As a movie about intimacy Columbus is a masterpiece.” – Josephine Livingstone, The New Republic

“Columbus crept up on me so gradually and quietly that I don’t even know when I started to love it. When it was over, though, I was left with a sweet aftertaste that stayed with me for hours.” – Angie Han, Slashfilm

“A clever and compelling exploration into how physical structures can come to represent emotional landmarks in our personal lives.” – Jordan Hoffman, Vanity Fair