Frankie, an aimless teenager on the outer edges of Brooklyn, is having a miserable summer. With his father dying and his mother wanting him to find a girlfriend, 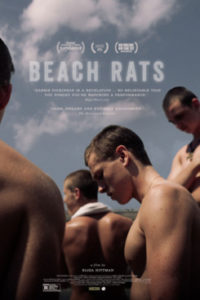 Frankie escapes the bleakness of his home life by causing trouble with his delinquent friends and flirting with older men online. When his chatting and webcamming intensify, he finally starts hooking up with guys at a nearby cruising beach while simultaneously entering into a cautious relationship with a young woman. As Frankie struggles to reconcile his competing desires, his decisions leave him hurtling towards irreparable consequences.  Director and writer Eliza Hittman (It Felt Like Love) talks about sexual identity, dealing with loss, and growing up in an era of America’s broken dream.

For news and updates go to: beachratsfilm.com

“Dark, dreamy and entirely engaging. Very much the work of a filmmaker with her own distinctive voice. Leaves a haunting impression in its wake.” – David Rooney, THE HOLLYWOOD REPORTER