Never before released in the US, Franco Rosso’s incendiary BABYLON had its world premiere at Cannes in 1980 but was deemed “too controversial, and likely to incite 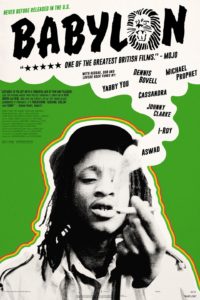 racial tension” (Vivien Goldman, Time Out) by the New York Film Festival that same year. Raw and smoldering, it follows a young reggae DJ (Brinsley Forde, frontman of landmark British group Aswad) in Thatcher-era Brixton as he pursues his musical ambitions, while battling fiercely against the racism and xenophobia of employers, neighbors, police, and the National Front. Written by Martin Stellman (QUADROPHENIA) and shot by two-time Oscar® winner Chris Menges (THE KILLING FIELDS) with beautiful, smoky cinematography that’s been compared to TAXI DRIVER, BABYLON is fearless and unsentimental, yet tempered by the hazy bliss of the dancehall set to a blistering reggae, dub, and lovers rock soundtrack featuring Aswad, Johnny Clarke, and others, anchored by Dennis Bovell’s (The Slits) atmospheric

score. BABYLON is the product of outsiders: director Rosso (1941-2016) immigrated from Italy as a child, Stellman is the son of Viennese Jewish immigrants, producer Gavrik Losey is the son of blacklisted Hollywood director Joseph Losey, and composer Bovell immigrated from Barbados, and was falsely imprisoned for running a sound system—the script was partly based on his experiences. Beyond the significance of being the only feature film about London’s sound system scene, BABYLON unflinchingly observes the place of marginalized people in a society resistant—to the point of violence—to multiculturalism. Writer Martin Stellman joins us to talk about the impact that Babylon had on the Caribbean diaspora living in London, the neo-realism style of the film and winding path that Babylon has taken over the last 40 years.

For news and updates go to: kinolorber.com/film/Babylon

“A STORY WITH LITERALLY EPIC STAKES. It’s no surprise why the film may resonate now—its themes of finding community through art and trying to exist in a society that doesn’t want you are unfortunately both timeless and extremely current.” – Jaya Saxena, GQ

“FEARLESS. Loud and musical and cheerful and funny, and also tragic.” – David Robinson, The Times“EXPLODES IN THE GUT with a powerful mix of pain and pleasure. Like the reggae music that pulses through it, Babylon is RICH, ROUGH and REAL. And like the street life of the young black Londoners it portrays, it’s THREATENING, TOUCHING, VIOLENT and FUNNY.” – Simon Perry, Variety

“FIVE STARS. One of the greatest British films.” – MOJO