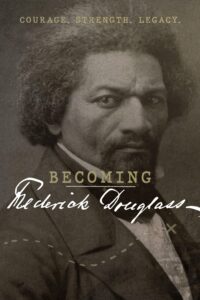 nto slavery became one of the most prominent statesmen and influential voices for democracy in American history. Born in 1818 on Maryland’s Eastern Shore, he escaped from slavery in 1838 and went on to become the most well-known leader of the abolitionist movement. A gifted writer and powerful, charismatic orator, it is estimated that more Americans heard Douglass speak than any other 19th-century

figure, Black or white. BECOMING FREDERICK DOUGLASS explores how Douglass controlled his own image and narrative, embracing photography as a tool for social justice,

and the role he played in securing the right to freedom and complete equality for African Americans. Acclaimed actor Wendell Pierce is the voice of Frederick Douglass in both films. Co-director Nicole London joins us for a conversation on the heroic lives and turbulent times of Frederick Douglass and Harriet Tubman.

For more go to: becomingfrederickdouglass.org

Director’s Statement – Given that Frederick Douglass was one of the most prolific and powerful orators of his time, we were interested in exploring how he created and controlled his image, and ultimately how he used it to shift public opinion around abolition. It was such a gift to have the inimitable Wendell Pierce provide the voice of Douglass to bring his words to life. Wendell’s dynamic performance, coupled with the many stunning photographs taken throughout Douglass’s lifetime, show how Douglass evolved to become one of the most influential and enduring social justice activists in American history. – Stanley Nelson

About the filmmaker – Nicole London is an Emmy-winning and Grammy-nominated producer/director who began her career in public affairs before working as an associate producer for PBS’s To the Contrary.  She eventually focused on the long story format of documentaries as her way to impact the public conversation about Black and women’s histories. She has worked on several projects with top directors in documentary film, including American Masters’ Marvin Gaye: What’s Going On; Sammy Davis, Jr.: I’ve Gotta Be Me; POV’s American Promise; and Independent Lens’ The Black Panthers: Vanguard of the Revolution, which was nominated for a 2016 Exceptional Merit In Documentary Filmmaking Emmy. London was also the producer for Miles Davis: Birth of the Cool, for which she was nominated for a 2020 Grammy for Best Music Film and won the 2021 News & Documentary Emmy for Outstanding Arts and Culture Documentary. In 2021, she was honored as a Trailblazer at the 22nd Annual African American Women In Cinema Film Festival. She is currently working on a new American Masters documentary on Black pianist Hazel Scott (1920-1981). Earlier this year, I served as the guest editor of the Harriet Tubman Bicentennial Project, which launched Feb. 1. London and I recently chatted about Tubman’s heroism and entrepreneurial spirit, and what it was like to reckon with her legacy.