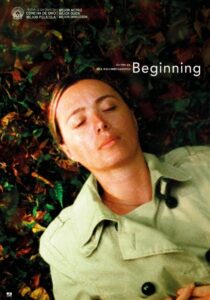 director Dea Kulumbegashvili’s debut feature film zeroes in on Yana, a despondent woman wrestling with her crippling emotional isolation within a small community of Jehovah’s Witnesses. The setting for this harrowing story is a sleepy provincial village outside of Tbilisi, the capital of Georgia, a predominately Orthodox Christian country. Her husband, David, is the spiritual leader of the Witness community that has recently been terrorized by the fire bombing of their makeshift church by an extremist group. In the midst of this

conflict, the familiar world of Yana slowly begins to unravel. Yana’s inner discontent grows as she struggles to deal with a sexual assault, an emotionally abusive husband and her own desires for a livable future. BEGINNING is Georgia’s entry for the Best Foreign Film for this year’s Academy Awards. Co-writer (Rati Oneli) and director Dea Kulumbegashvili joins us for a conversation on collaboration with Cinematographer Arseni Khachaturan, finding the right timbre for telling the story of Yana and locking in a spectacular performance by Yana’s Ia Sukhitashvili.

About the filmmaker – Dea Kulumbegashvili’s filmmaking has been informed by her experience of growing up in a place with such a mix of ethnicities and nationalities. Dea was born in Oriol, Russia and raised in a small town called Lagodekhi at the foot of the Caucasus Mountains in Georgia, a former Soviet Union republic. In 2016, she became the first Georgian director to have a film accepted in Cannes — her stunning minimalist short Invisible Spaces. In 2020, her feature debut BEGINNING became the first Georgian film to win the Golden Shell for best film as well as picked up the best director, best actress and best screenplay honors. If BEGINNING is nominated for the best international feature award at the 93rd Academy Awards in 2021, it will be another first for Dea, as well as a first for Georgia.

“The director’s compositions, way of holding us at a sometimes paralysing remove before bringing us painfully close, and brilliant use of off-screen space mark her out as someone to watch very closely, hopefully for years to come.” – Emma Simmonds, The List

“[T]here is an intensely ritualistic quality to “Beginning,” a remarkable – and remarkably bleak – debut feature… that unfolds with spare, mock-ceremonial deliberation, pausing every so often for an exquisite twist of the knife.” – Justin Chang, Los Angeles Times

“A breathtaking scourge of a film.” – Nicholas Bell, IONCINEMA.com

“The film is composed of just a handful of medium static shots. Kulumbegashvili never overplays her hand, she continuously shifts the mood of her film – it can go from meditative to angry to downright provocative in the span of a few scenes.” – Jordan Ruimy, World of Reel

“The boxy frame of the camera turns into a trap in “Beginning,” the masterful debut feature by the Georgian filmmaker Dea Kulumbegashvili.” – Devika Girish, New York Times