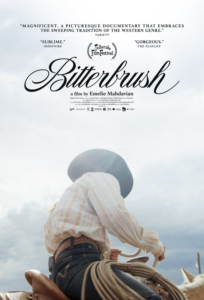 Patterson and Colie Moline, range riders who are spending their last summer herding cattle in remote Idaho. Totally off the grid with only their dogs as companions, Hollyn and Colie brave inclement weather and perilous work conditions while pondering their futures. A portrait of friendship, life transitions, and the work of two skilled young

women in the isolated and beautiful landscape of the American West, BITTERBRUSH is an intimate portrayal of a way of life rarely seen on film that takes us beyond the “oh look” stereotypes of women’s work and celebrates the excellence of their skill and expanding capacity to adapt. Director Emelie Mahdavian joins

us to talk about the logistical challenges of capturing the stunningly beautiful and rugged terrain that Hollyn and Colie have to navigate, conveying the tension that comes from doing what you love in a potentially very dangerous “workplace” while highlighting the friendship and teamwork that is at the heart of this enthralling journey.

For updates and screenings go to: magpictures.com/bitterbrush

About the filmmaker – Director / Producer / Editor Emelie Mahdavian is an Emmy, Peabody, and Sundance Award-winning filmmaker who was selected for DOCNYC’s 2020 “40 Under 40” list. She produced, wrote, and edited MIDNIGHT TRAVELER, which won numerous international prizes and was nominated for a Gotham Award for Best Documentary. Previously, she created dance films which screened at Dance on Camera at Lincoln Center and other international museums and festivals. She is currently developing a nonfiction feature with Alonzo King Lines Ballet and writing a narrative feature set in the American West. Emelie was previously a professional dancer and has a Ph.D. in Performance Studies with an emphasis on Film Practice as Research from the University of California, Davis. She is an Assistant Professor in the department of Film and Media Arts at the University of Utah.

“Throughout the pair’s gentle encouragement to one another and offers of help (usually refused) add up to a lovely depiction of friendship that often doesn’t make it onto cameras.” – Stephen Saito, Moveable Fest

“It poses piercing existential questions about purpose and independence, particularly for women choosing work that has long been deemed the exclusive province of men.” – Sheri Linden, Hollywood Reporter

“With “Bitterbrush,” Mahdavian announces herself as a filmmaker with a keen eye for capturing the contradictions and complexities of outsider women’s lives.” – Kristen Lopez, indieWire

““Bitterbrush” resides in the cowboying of memory and legend, a grueling gig of man-or-woman-handling beasts in glorious, simple solitude and some of the last unspoiled scenery in America.” – Roger Moore, Movie Nation