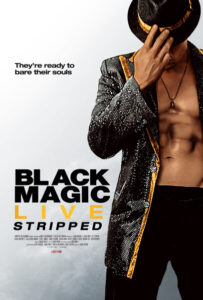 behind the scenes of Las Vegas’ only black male revue show, uncovering the often complicated lives of its male strippers. Through the eyes of owner Eurika Pratts and CEO LaMarre, and its all-black staff and cast, explore the challenges, struggles and growing pains the show and its core group of dancers have overcome during their four succesful years on the Strip. Director Jean Claude LaMarre joins us for a conversation on the re-release of his first film,  Higher Ed challenges of creating a television series and an all black revue, breaking

For news and updates go to: lightyear.com

Black Magic Live: Stripped available VOD/Digital on 9/7 and DVD on 9/21

About the filmmaker  – Writer director and actor, Jean Claude LaMarre is considered somewhat of a maverick among his peers. He began his career as an actor when he was discovered by Spike Lee and cast in the critically acclaimed film MALCOLM X, followed by a role in Albert and Allen Hughes sleeper hit DEAD PRESIDENTS. His commitment to tackling unconventional stories about the Black experience has resulted in a string of indie hit films in the specialty and television market since 2002. Notable projects include: the urban cult favorites, GANG OF ROSES (2003), a revisionist all-female Western, starring Lil Kim, Stacy Dash, Macy Gray, LisaRaye and Bobby Brown and the seven PASTOR JONES (2005 – 2013) movies starring LaMarre in the title role; the Fox dramedy, NORA’s HAIR SALON (2004), the biographical drama SUGAR VALENTINE (2005); and the efficacious comedies HIGHER ED (2001) starring Hill Harper, Leila Arcieri and Aries Spears and GO FOR BROKE (2002) starring Pras Michel and Michael A. Goorjian. In 2017, Jean Claude entered the reality television space, as the creator and executive producer of “Vivica’s Black Magic” for Lifetime. As the director of the Pilot episode, which became the highest tested pilot for Lifetime Network, the show was immediately ordered to series in an unprecedented multi-million dollar commitment for 8 episodes. In 2018, Jean Claude directed Patriot Pictures’ KINKY (2018), a sexually charged romance drama starring Dawn Richards and Robert Ri’chard.