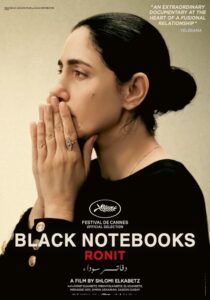 Shlomi Elkabetz –  BLACK NOTEBOOKS: RONIT invites us into the intimacy of a Jewish-Arab family, a family of uprooted exiles, in an imaginary story where a brother and sister revisit the past and the present to defy an implacable future. Ronit Elkabetz was a beloved and critically acclaimed star of Israeli cinema (LATE MARRIAGE, THE BAND’S VISIT, GETT). Elkabetz’s versatility, beauty and magnetism prompted the New York

Times, in 2008, to dub her “Israel’s Meryl Streep,” while other international critics compared her to an Almodovar heroine. Ronit Elkabetz co-directed three films, including GETT, with her brother, Shlomi Elkabetz. In BLACK NOTEBOOKS: RONIT, his love letter to his sister and to

cinema, Shlomi chronicles the making of their film GETT, as the siblings are faced with Ronit’s illness. Determined for Ronit to stay alive they embark on a journey, traveling the world with their film and attempting to change destiny. Ronit Elkabetz died in 2016 at the age of 51. Director Shlomi Elkabetz joins us to talk about his decision to move forward with this film, Ronit’s artistry as a performer and director and the lasting impact her passing has had on the people whose lives she touched.

For news and screenings go to: panoramafilmsus.com/black-notebooks

About the filmmaker – Shlomi Elkabetz is a Moroccan actor, screenwriter, director, producer based between Israel and France. At 21, he moved to New York to attend drama lessons. In 2004, he co-wrote and co-directed To Take a Wife with his sister, actress Ronit Elkabetz, which was awarded the Critics’ Prize and Audience Prize at the Venice Film Festival in 2004. They continued working together and made The Seven Days (2008) and Gett: The Trial of Viviane Amsalem (2014). Elkabetz made his acting debut in the TV mini-series Our Boys (2019). His sister starred in all his films, and Cahiers noirs (2021) was her last film before she passed away. Shlomi’s films includes: To Take a Wife (2004, co-dir), Shiva/The Seven Days (2008, co-dir), Edut/Testimony (2011), Gett: The Trial of Viviane Amsalem (2014, co-dir), Cahiers noirs/Black Notebooks (2021, doc)