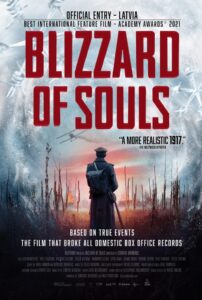 World War, as seen through the eyes of Arturs (Oto Brantevics), an innocent sixteen-year-old farm-boy turned soldier. Too young to fight but old enough to die, he enlists to serve on the Eastern Front with dreams of becoming a hero. Conscripted into one of Latvia’s first national battalions, Arturs soon discovers the grim reality of trench warfare. Fighting alongside his father and brother, he experiences the loss of his home and loved ones while growing up surrounded by constant danger and death on the battlefield. Adapted from the book by Aleksandrs Grins, which was banned in the USSR, the

story was based on Grins’ own war experiences in a Latvian battalion, and the film is the biggest box office success in Latvia of the past 30 years. Director Dzintars Dreibergs joins us for a conversation on the tremendous impact that World War One had on the Baltic states of Lithuania, Estonia and Latvia, particularly in terms of their relationship to Stalin’s Soviet Union and how the loss of life as well as the heroism the Latvians experienced during the war became the spark for independence from the Soviets 70 years later.

For news and updates go to: filmmovement.com/blizzard-of-souls

Director’s Statement – First, the world is in the great place now. We live better than ever. We fight for human values which is impossible mission during the war. Many memories of soldiers tell how hard it was to live with themselves after they discovered animals within themselves, we can do sad things when fight for survival becomes real. However, the sad part is that still there are state leaders that can convince people to kill for some ideology, leaving other’s nothing else but to defend and then starting long and crazy circle of many tragedies. I hope the world can learn from the history and stop this nonsense. – Dzintars Dreibergs

“A more realistic 1917” – The Hollywood Reporter

“The filmmakers are unafraid of the picturesque, lighting scenes so they resemble old-master canvases.” – Mark Jenkins, Slant Magazine

“An honest yet frenzied interpretation of the veracity of warfare, with utterly breathtaking cinematography, reminiscent of the brilliance of “Band of Brothers”…As the young, endearing lead, Brantevics is extraordinary” – Guy Lambert, The Upcoming

“Blizzard of Souls, the 1934 novel from which this is drawn, is based on author Aleksandrs Grīns’ own frontline experiences, and The Rifleman successfully captures the hazy, gauzy quality of memory.” – Ellen E Jones, Guardian

“One of the best war films of the last few years.” – Rob Aldam, Backseat Mafia