BOOM: A Film About the Sonics tells the untold story of one of rock ‘n’ roll’s 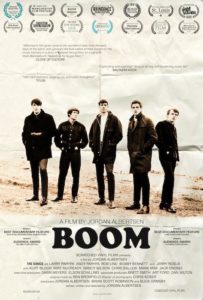 wildest and most influential bands, The Sonics. For the first time ever, all five original members of the band tell the story of how it all went down, from beginning to end. ‘Boom’ takes a deep dive, exploring how a relatively unknown band from the Pacific Northwest became a worldwide phenomenon 50-years after their heyday, and in doing so, shaped music for decades to come (whether it was apparent at the time or not). Featuring interviews with homegrown heroes and breakthrough artists

alike, Pearl Jam, The Sex Pistols, Heart, Mudhoney, and many, many more. BOOM: A Film About the Sonics is the documentary debut of filmmaker Jordan Albertsen. He joins us to talk about his honest and insightful look into the one of rock music’s more subversive bands.

For news and updates go to: sonicsfilm.com

** 2019 Newport Beach Film Festival screenings – when and where