Since 1935 the American Legion has sponsored a program for 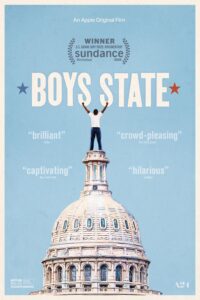 teenagers to learn about democracy and civil discourse through a week-long engagement in self-governance. The sensational winner of the Grand Jury Prize for documentary at this year’s Sundance Film Festival, “Boys State” is a wildly entertaining and continually revealing immersion into a week-long annual program in which a thousand Texas high school seniors gather for an elaborate mock exercise: building their own state government. Filmmakers Jesse Moss and Amanda McBaine closely track the escalating tensions that arise within a particularly riveting gubernatorial race, training their

cameras on unforgettable teenagers like Ben, a Reagan-loving arch-conservative who brims with confidence despite personal setbacks, and Steven, a progressive-minded child of Mexican immigrants who stands by his convictions amidst the sea of red. In the process, they have created a complex portrait of contemporary American

masculinity, as well as a microcosm of our often dispiriting national political divisions that nevertheless manages to plant seeds of hope. Co-directors Amanda McBaine and Jesse Moss joins us for a conversation on chronicling the rough and tumble world of 1,000 aspiring politicians and how some of them shattered expectations,  emerging as the potential leaders for a more harmonious future.

“The punchiest doc of the year focuses on an annual leadership conference in which teen boys prove they can run a government better than the old farts doing it now. This wake-up call promises a change in the air. And it’s exhilarating.” – Peter Travers, Rolling Stone

“Some of these boys are already as hard-faced and cynical as velociraptors. Some are gentle and sweet natured. Some are even shown changing their minds. It’s an amazing spectacle.” – Peter Bradshaw, Guardian

“This extraordinary portrait of a democratic process in microcosm is both a testament to how Washington, D.C. and the rest of the country could achieve bipartisanship as well as a look at what has led to such a fractured political system.” – Jordan Raup, The Film Stage

“There are so many laughs, and so many telling and relatable moments, and so many fascinating, colorful characters here, Boys State is utterly mesmerizing.” – Tasha Robinson, Polygon