In this eye-opening documentary, BRAINWASHED: SEX-CAMERA-POWER, 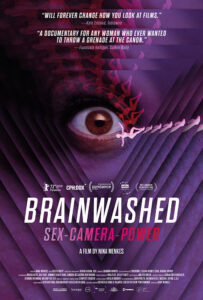 celebrated independent filmmaker Nina Menkes explores the sexual politics of cinematic shot design. Using clips from hundreds of movies we all know and love – from METROPOLIS to VERTIGO to PHANTOM THREAD – Menkes convincingly makes the argument that shot design is gendered. BRAINWASHED: SEX-CAMERA-POWER illuminates the patriarchal narrative codes that hide within supposedly “classic” set-ups and camera  angles, and demonstrates how women are frequently displayed as objects for the use,  support, and pleasure of male subjects. Building

on the essential work of Laura Mulvey and other feminist writers, Menkes shows how these not-so-subtle embedded messages affect and intersect with the twin epidemics of sexual abuse and assault, as well as employment discrimination against women, especially in the film industry. The film features interviews with an all-star cast of women and non-binary industry professionals including Julie Dash, Penelope Spheeris, Charlyne Yi, Joey Soloway, Catherine Hardwicke, Eliza Hittman, and Rosanna Arquette. Director Nina Menkes joins us for a conversation on how and why she crafted BRAINWASHED to be seen as a call-to-action that can fundamentally change the way you see, and watch, movies.

For more go to: kinomarquee.com/Brainwashed

About the filmmaker – Called “Brilliant, one of the most provocative artists in film today,” by The Los Angeles Times, and a “Cinematic Sorceress” by The New York Times, Nina Menkes’ films synthesize inner dream worlds with brutal, outer realities. Her work has been shown widely in major international film festivals, including Sundance (four feature premieres), the Berlinale, Locarno, Toronto, and MOMA in NYC. BRAINWASHED is Menkes’ seventh feature film. Her previous work includes:  THE GREAT SADNESS OF ZOHARA (1983), MAGDALENA VIRAGA (1986), QUEEN OF DIAMONDS (1991), THE BLOODY CHILD (1996), PHANTOM LOVE (2007), and  DISSOLUTION (2012). Menkes also shot and co-directed the feature documentary MASSAKER (2005) which won a FIPRESCI prize at the Berlinale. She has had numerous international retrospectives and her early work has been selected for restoration by the Academy Film Archive and Scorsese’s Film Foundation. Menkes is a directing member of the Academy of Motion Pictures Arts and Sciences, a Guggenheim Fellow and on the faculty at California Institute of the Arts. For more information: www.ninamenkes.com

“Destined to forever change how you look at films.” – Kate Erbland, Indiewire

“Menkes is a real no-bullshit breath of fresh air. With a torch. And with any luck, she’s heading your way to set fire to something, soon.” – Finn Halligan, Screen Daily

“The knowledge that took me years of study and practice to acquire is now available to anyone who watches BRAINWASHED.” –  Marilyn Ferdinand, Alliance of Women Film Journalists

“[Menkes] calls for a radical reinvention of how shots and film grammar are formulated… Viewers are meant to wrestle with this film, not passively consume a simple message — and they’ll leave invigorated.” –  Violet Lucca, Bust

“Subversive!…Menkes is not afraid to take on the film canon, and the directors hailed as the gold standard.” – Ray Lobo, Film Threat